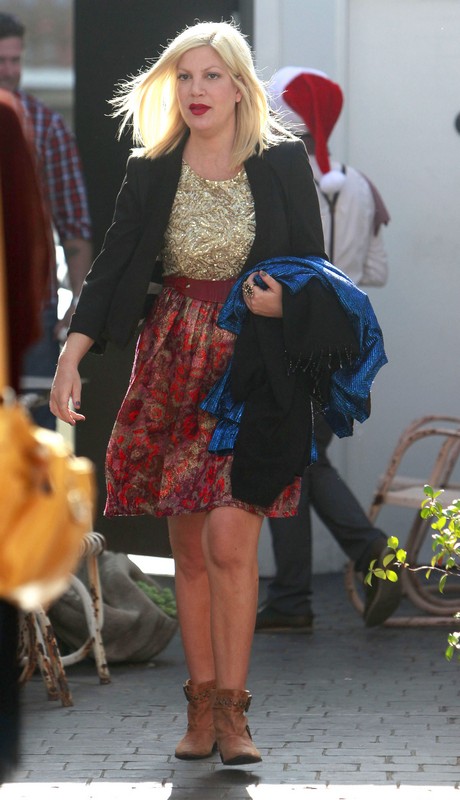 Actress Tori Spelling is one of those do-it-all moms. She has a happy marriage to Dean McDermott, four beautiful kids, a successful career, and looks gorgeous all the while. Her style is a bit bright for my tastes, but she’s happy, and that’s obvious! But the mother-of-four has a new years resolution, and she is desperate to stick to it! The former actress has made a promise to herself: “stop having kids,” but we wonder how long it will last!

Tori has four kids, and they’re all within 5 years of each other! The woman has been a baby machine, with barely 10 months separating her last two births! During her lat pregnancy, she was at death’s door, suffering from placenta previa, which forced her to spend her entire term on strict bed rest. Her son, Finn, was born premature via c-section, and Tori had to have emergency surgery after her scar ruptured, which resulted in a two-week hospital stay. The harrowing medical emergencies have put her off another pregnancy. Instead, she’s enjoying her for cute kids.

Tori is focusing on finding more grown up time in her life, and recently opened up about the stress of attending a kid-free wedding with her husband. She joked in a blog post on her webist editorial, “We haven’t been out without our kids past 7pm in probably 2 years!” After a wild night at a friend’s ‘no kids’ wedding, she “felt absolutely horrible, and combing dried red wine colored puke from my hair in the shower was a low point. But, sitting in that shower I had a realization. Well two realizations. One, I would never drink that much again. And, two, that I was proud of myself for letting go and allowing myself one night of debauchery.” Well, here’s to a year full of adult debauchery and no more babies! Do you keep resolutions? Do you think Tori can manage to stay not-pregnant for a whole year?