Charlie Sheen Caught on Tape – Says He Meant to Say Maggot, Not Fa**ot! 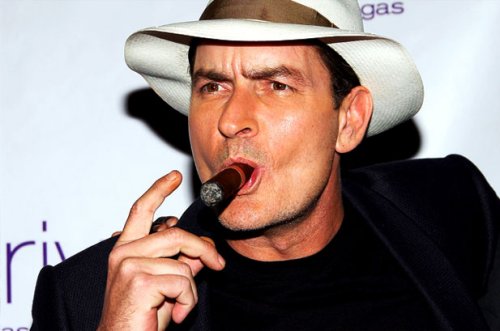 Charlie Sheen was partying at a bar in Mexico when he was taped saying, “How are we doing? Lying bunch of fa**ot assholes, how are we doing?” Charlie’s explanation is pretty hilarious – he says he has a lisp… Okay. That’s a new one. I’ve never heard of a speech impediment that replaces an “M” with an “F.” What does the winning actor think – that he’s on the King’s Speech?

Come on – why doesn’t Charlie sack up and just admit that he used the homophobic slur? Maybe that’s what he and his party buddies call each other. Not that it’s a nice word, but unless you’re aiming it in an insulting manner at an actual homosexual, it’s not the end of the world. It’s not hate speech unless he was directing it toward someone who was gay. At worst, it’s an inappropriate choice of words, but he’s no Michael Richards, dropping the n-bomb at a stand up show.

Charlie explained to TMZ saying, “I meant no ill will and intended to hurt no one and I apologize if I offended anyone. I meant to say maggot but I have a lisp.” The former Two and a Half Men star was opening a bar – El Ganzo – at a posh hotel in Cabo San Lucas, Mexico when his lisp attack struck.

I’m not offended and I checked with a gay buddy of mine who’s also not offended – he thinks Charlie Sheen’s an idiot and doesn’t pay attention to anything he says. The only people who would be offended by this would be people who make it their business to be offended by everything – people who’s righteous indignation is sparked by any little slip. I’m sure Gloria Allred will be rushing to file a civil rights lawsuit sometime this week, but seriously? It’s no big deal. I wouldn’t even be writing about it except to counter what I’m sure will be a wave of other blogs inciting outrage at Charlie’s verbal whoopsy.

What I don’t like is that he tried to explain it away rather than own it. Charlie’s explanation has more holes in it than his dental work from years of drug abuse… Charlie should just tell his critics to muck off…