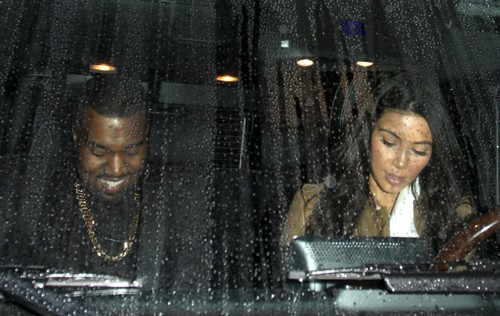 Kim Kardashian is pregnant, it has been confirmed by Khloe Kardashian, Kourtney Kardashian, Kanye West and their representative. Wowza!! The reality star and her rapper boyfriend, who have been dating since February 2012, made the announcement during Kanye’s recent show at Revel in Atlantic City, New Jersey.

West, who is a very private person, made the big announcement after performing one of his songs on stage, insiders explain. Kim who was also at Ye’s performance, supposedly didn’t know he was about to drop the bombshell to thousands of fans, but better to say it now than never right? The rapper told the crowd: “Stop the music… Make noise for my baby mama right here”.

Kanye then smiled before continuing his show. Now, this could have been seen as a joke from the man who loves to piss people off – Taylor Swift for example – but it definitely wasn’t as Kim’s sister, Khloe and Kourtney then took to Twitter to back up what the rapper had told the audience… Kim is 100% pregnant.

Khloe wrote on her Twitter page: “Keeping secrets is hard with so many family members! Especially when you are so freaking excited!!!!! LOVE is everything!!!!,” while Kourt wrote: “Been wanting to shout from the rooftops with joy and now I can! Another angel to welcome to our family. Overwhelmed with excitement!”.

A magazine cover – most likely for UsMagazine – is supposedly hitting the market later this week. A representative has also confirmed the news, sources revealed. The 32-year old is due sometime during the summer, and something tells us that Kourtney and Kim Take Miami’s finale is going to have this being shown!! Woohoo!