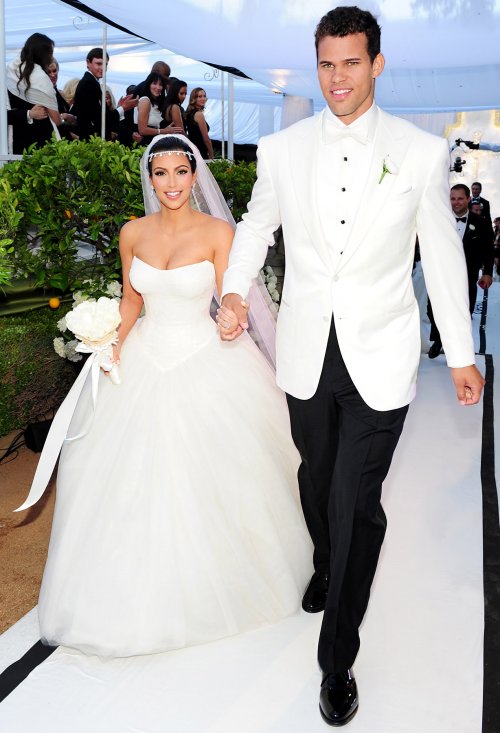 Kanye West announced to the world last night at his Atlantic City concert that he’s knocked up Kim Kardashian. Congratulations followed, but come on people, do we not realize she is still very much married to Kris Humphries? Remember him? There was a lavish wedding televised on E! where Kim promised to love, honor, cherish, til death do them part. I’ll have to look back at the video, but I’m pretty sure the vows did not include, “I will love, honor and cherish you for 72 days, ditch you without explanation, humiliate you in the eyes of the world, refuse to give you an annulment and then very publicly date and then become impregnated by a whiny, annoying hip hop singer/fashion mogul.“

Poor Kris – his New Year’s must be off to a crap start with him waking up to this news. Not only have Kim and Kanye taken an epic crap all over his life, but he’s on the Brooklyn Nets bench plagued with minor injuries and every time he rolls into a club, the a-hole DJs like to play Kanye West songs. Why pick on him? All he did was fall for those big, brown, overly made-up eyes of Kim Kardashian and follow her ample bottom down the aisle.

Kris filed for an annulment based on fraud rather than simply give Kim a divorce and I sympathize with him. He’s said to be a very religious person and so divorce means something different to him than it does to the cheating, divorcing, baby out of wedlock making Kardashian klan. It’s not a stretch to believe that she married him under fraudulent pretenses – who gives up on marriage after 72 days unless you’re being abused – which she clearly wasn’t? If anyone was abused in that marriage, it was Kris Humphries.

I hope Kim will do the right thing and sign off on the annulment – she should even write him a nice fat check for the inconvenience. There were definite damages done to his reputation by her wedding and ditching him so rapidly. He’s become the butt of endless jokes for being a fool and falling sincerely in love. Kris continues to be subjected to embarrassment from Kim and Kanye’s antics – remember that tweet Kanye posted “I just f**ked Kim so hard!” That’s what every man wants to read about his wife, right?

If she doesn’t grant him the annulment and the marriage drags on until she gives birth to the Kimye spawn, how horrible will it be for Kris? He wanted Kim to give up the Hollywood life, move to Minnesota with him and have babies – instead she’ll be birthing the rapper’s brat while still wed to him unless something drastic changes soon.

Many people are congratulating Kim and Kanye on the their future progeny, but I say shame – shame on you both. This pregnancy was no accident – it was clearly on purpose, intentional and done with the full knowledge that it could irrevocably damage Kris Humphries’ already diminished reputation. I hope he sues her for intentional emotional distress.

Kim, for once in your selfish, self-centered, egotistical existence, why don’t you think about someone else and grant Kris the annulment he so obviously deserves? Set him free, apologize and give him a six figure parting gift for not hunting down and killing you and Kanye for so publicly cuckolding him on this grand scale. Do the right thing so your baby can be born in peace to you and your rapper boyfriend and not as the result of an adulterous relationship while you were still married to someone else you promised your life to.