Kristen Stewart and Robert Pattinson In England for New Years! 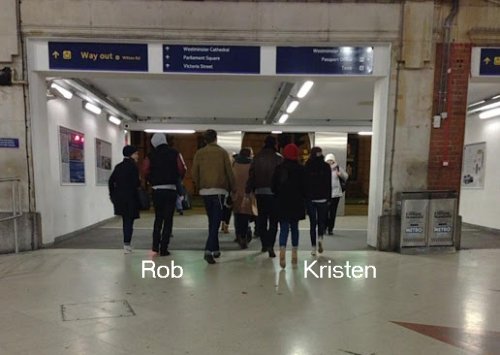 The time is ticking down on Robert Pattinson‘s Valentines Day deadline he’s given Kristen Stewart on their relationship. Although the Twilight lovers were apart for Christmas, it looks like they’re heating things up for the New Year in chilly England. Rumor has it that Rob’s sister Lizzie Pattinson is furious that he’s still seeing cheating trampire Kristen and that’s probably why he left her out of his family’s holiday plans. But now Rob, Kristen and a passel of American pals are headed to the Isle of Wight to ring in the New Year tonight.

The rowdy crew was spotted in the subway (the Tube to the Brits) at Victoria Station headed for the vacation spot. The Isle of Wight is a true island and access to it is via ferry or (get this) hovercraft – yes – a freaking hovercraft! Wonder which one Robsten will choose as their mode of transportation. Vampires can fly right? That makes the hovercraft my mode of choice, plus it’s just so freaking cool.

Kristen was spotted flying into London’s Heathrow airport on Thursday by a fan who tweeted: “I hope I don’t see any vampires or werewolves on this flight because the homegirl from #TWILIGHT is sitting across from me #protectYOURneck.” The Twilight lovers next attracted fan attention when they hit the subway this weekend. Another Twihard tweeted: “Just sat next to Robert pattinson and christen Stewart on the tube oh my god.” I give her high marks for enthusiasm, even if she can’t spell their names properly. Not that it’s an important thing for anyone on the planet to know.

So what do you think fans and arch enemies of Robsten? Are they truly in love and is this trip a testament to how solid their rehabilitated relationship is or is this just more PR and photo ops prior to an inevitable break-up now that the Twilight franchise is locked down and over with?

I personally think their break-up is inevitable. You don’t get past seeing your girlfriend’s kneecaps pressed to the windows of her mini Cooper and the top of her director’s head disappearing from sight into her lap. You just don’t. That’s a photo op that’s got to be indelibly imprinted on Rob’s brain. Ick.