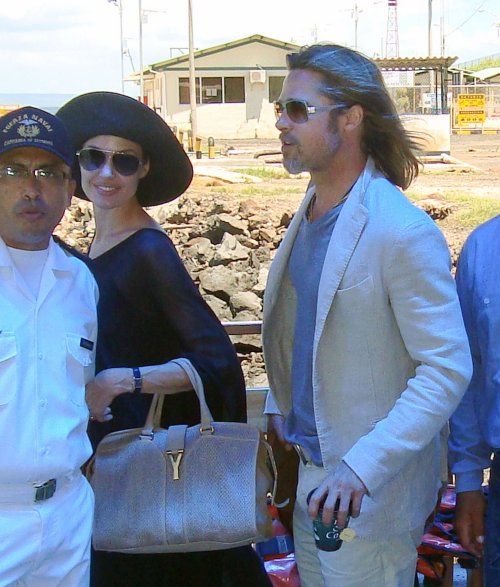 Brad Pitt and Angelina Jolie may have pulled another fast one on us and secretly tied the knot on Christmas Day on an exclusive island retreat. I love these two and their herd of children they’ve bred and accumulated. I soooo hope this is true. For such a mega-watt couple, they’ve been able to keep a surprising amount of their personal lives secret from the world – a world that’s always watching and eager for news of the glam duo and their adorable brood.

Back in April, Brad was able to propose to Angie on the sly and this was kept under wraps until she was seen out with the 16 carat $500,000 sparkler. The photo above is Brangelina on a similar island outing right after Brad proposed! After the ring was spotted, Brad’s rep confirmed the engagement saying, “Yes, it’s confirmed. It is a promise for the future and their kids are very happy.” The gorgeous ring took a year to design, but it looks like their nuptials didn’t take near that long – and may already be a done deal.

During a promotional interview for his disappointing action flick Killing Them Softly, Brad told E! News, “I’ll tell you what, since we’ve been engaged, I’m surprised how much it meant to me and everyone should have that. I also feel like the time has come. It’s soon and I got a good feeling about it.”

Brangelina has been on vacation in the Turks and Caicos Islands in the Caribbean with their six kids – but it’s the rest of the entourage that may indicate that something important was afoot. Pitt’s parents Jane Pitt and William Pitt, brother Doug Pitt and sister Julie Pitt were all in attendance. There’s a ton of people traveling with the globe hoppers including a reported dozen nannies (two per Jolie-Pitt offspring) and they’re all staying at Donna Karan’s luxury spread on Parrot Cay called “The Sanctuary.”

Reps for the couple are holding comments for now, so that could be a yes, could be a no. I’m sure the duo doesn’t want a flock of paparazzi vultures descending and wrecking their big family vacation/possible wedding celebration, but hopefully we’ll get a glimpse of the couple soon and we can check out their ring fingers for wedding bands.

Pitt has said before that the kids are putting the pressure on them to tie the knot and wouldn’t that have been the best Christmas gift for Maddox, Zahara, Pax, Shiloh, Knox and Vivienne? I’ve got fingers crossed that the two really did tie the knot over the holidays. I think they’re in this for good – after all, they’ve been together over seven years already – that’s longer than both of her other marriages combined and as long as he was with Jennifer Aniston (four and a half years of marriage and three of dating.) So congrats (hopefully) on the Jolie-Pitt wedding!