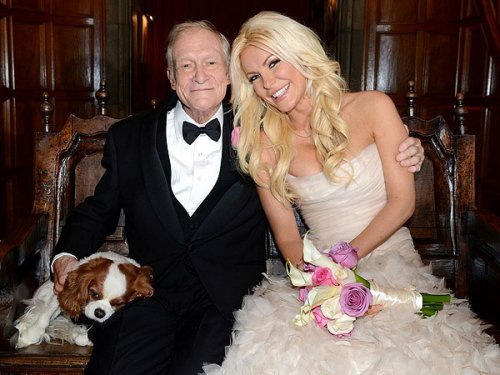 I’ve heard of May-December romances, but Hugh Hefner‘s relationship with Crystal Harris is more January 1st-December 31st. Last night was take two on their nuptials and this time the bride stuck around for the I Do’s. 86 year old Hef and 26 year old Crystal had a lavish wedding ceremony planned for June 2011 when the bride decided to pull a runaway and ditched her octogenerian lover just five days before they were to get hitched.

After dumping her lover, she dropped a widely panned single and then hit up the Howard Stern show to diss Hef’s bedroom skills, saying, “Hef doesn’t really take off his clothes. I have never seen him naked.” Perhaps that’s just etiquette – if I had to roll in the hay with an 86 year old, I would appreciate it if he kept his satin smoking jacket on and only revealed the minimum necessary appendages to accomplish the deed! But that wasn’t all the runaway bride said, adding: “It lasted like about two seconds. I was over it. I just like, walked away. I am not turned on by Hef. Sorry.“

I don’t know much about the libido of men that old, but maybe two seconds is pretty hot. And didn’t she know all this before she accepted the big diamond ring and started sending out save the date cards? Anyway, apparently the real world didn’t hold much appeal for Crystal after living large at the Playboy Mansion because she came running back after less than a year away. I just don’t understand why he took her back, but hey that’s love for you.

Harris had complained that he liked to cuddle and hang out with the girls at the Mansion, playing board games and tucking into bed early. Sounds great to me – unfortunately, Hef doesn’t seem to like ladies of an age that would be thrilled to play backgammon for hours and watch classic movies.

Last time Hef and Crystal were going to tie the knot, they planned a 300 guest list ceremony and shot a naked pictorial of the bride for the cover of Playboy that was captioned “Introducing Mrs. Crystal Hefner.” When the bride opted out, Hef rushed to add stickers to the cover that read instead “Runaway Bride.” This time their nuptials were much more low key – just 24 guests in the main hall of the mansion and no magazine covers!

I wonder if Hef put the old ball and chain on her (literally) before the ceremony to make sure she didn’t beat feet again. But seriously, Crystal’s on the winning end of this. Hef’s a great guy – I have a lot of admiration for his First Amendment crusades over the year. Plus he’s rich and you’ve got to figure he’s got no more than a decade left above ground. I’m sure Crystal’s got her fingers crossed that she’ll be inheriting while she’s still young enough to start another life with Hef’s money, happily ever after. 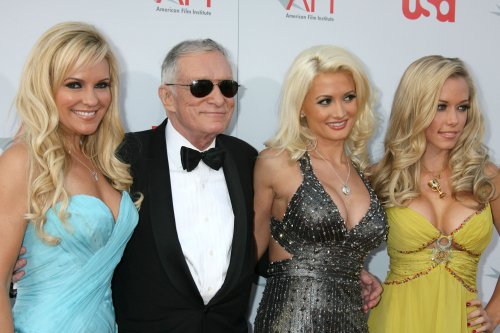 I always hoped he’d get hitched with Holly Madison or pull a polygamist move and also marry Kendra Wilkinson and Bridget Marquardt as well. E! could have launched a new series “The Sister Wives Next Door.” I was (inexplicably) a fan of The Girls Next Door  and thought that Holly genuinely cared for Hef. They broke up because Hef couldn’t knock her up and now she’s happily gestating in Vegas, Kendra’s married to and breeding with Hank Baskett and Bridget is… I don’t know. I’m sure she’s doing something, somewhere – she was a smart gal.

Congrats to Hef and new bunny bride Crystal! I hope this time she sticks around. He’s been unlucky in love too many times for a man who obviously really loves women – I hope this love sees him through til the end!