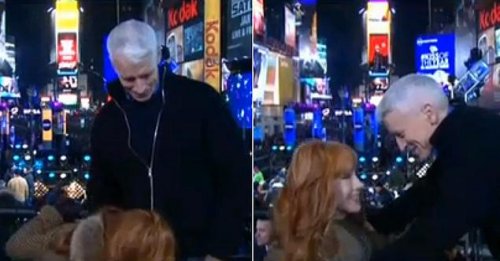 Kathy Griffin has done it again! Just when you thought her New Year’s Eve co-hosting duties with silver fox Anderson Cooper couldn’t get worse, the D-list comedian hit a new low. This year it was literal as she dropped to her knees to simulate giving the CNN newsman some oral love. Whoa! What? Yep. Even if he was up for getting naughty on TV, the openly gay anchor surely wouldn’t have picked the 50-something red head as his choice of on-air sex partners.

So how did the show digress to this point? It started off with Kathy’s usual ribald comments – and I have to admit I do find her pretty funny – both in her stand-up and her My Life on the D-list reality show. The hosting pair have been together for New Years for the past six years and it never fails to shock and amuse. This year, after Anderson mentioned the Twitter posts on the Anderson Cooper giggle drinking game (where you drink whenever Kathy sets him tittering), Kathy took it as a challenge.

Kathy told Anderson, “I’m going to tickle your sack” and he responded saying “I don’t know what you’re talking about. I have no sack of gifts here.” This should have been foreshadowing that the evening was going to revolve around the hunky Anderson’s privates… But it was after the big ball dropped, that Kathy got interested in Anderson’s more modest ones again.

After an on the scene report by CNN’s Gary Tuchman in Eastport, Maine, showed the town’s tradition of kissing an eight-foot sardine statue, Kathy was inspired to drop to her knees and plant a kiss on Anderson’s nethers. This should have sent the drinking game participants into overdrive because he begins giggling and covers his face, then tries to prevent her from doing it again, giggling the whole time.

Anderson struggles with her and tries to cover up her antics by asking, “Did you drop something?” Kathy quips back, “No, I was kissing your sardine.” When she tries to kneel again, he pulls her back up and Kathy says, “I’m going down. You know you want to.” Anderson gets the last laugh though and says, “Believe me, I really don’t. I never have.“

On last year’s New Year’s celebration, Kathy stripped down to her bra and panties which also embarrassed Anderson and caused him a fit of giggles. Lots of complaints about Kathy’s vulgarity followed this year’s show, but one of the most ridiculous was “Kathy Griffin kisses Anderson Cooper’s crotch on live TV…….millions of school children were FORCED to watch this FILTH! IDIOT!” Who forces school children to watch a New Year’s countdown? Most kids don’t make it to midnight and given that it’s common knowledge that anything Kathy Griffin is hosting will be risque, what parent would would sit their kids down in front of it?

Comments from morons aside, it was funny, but awkward. The real tell will be if Anderson or CNN refuses to have her on as co-host next year, but so far nothing she’s done – from stripping off her clothes to dropping f-bombs has gotten her kicked off yet, so they must like what Kathy’s doing. I sure did. And at least Anderson was giggling!