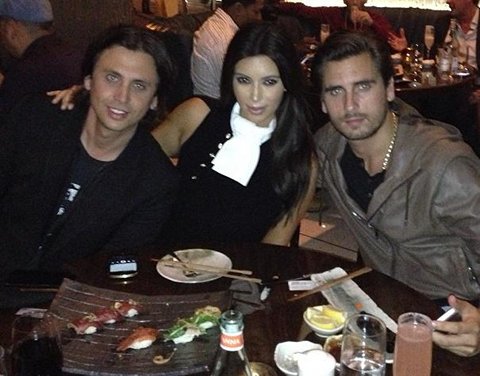 Two nights ago, we learned that Kim Kardashian is pregnant by her boyfriend Kanye West. The announcement lacked all the finesse and pomp typical to a Kardashian announcement, but all her family have confirmed it over Twitter. Now, we’re all wondering about maternity fashion, a wedding, a TV show, and Kanye’s role in the Kardashian klan. Kim isn’t a big drinker anyways, so we’re pretty sure giving up booze for the baby wont’ be a problem–but can the reality starlet give up sushi?

Kim was spotted dining with Scott Disick and BFF Jonathan Cheban at Sushi Mikasa, in the Shelborne South Beach hotel on December 13. Cheban is an investor in the restaurant, so the celebratory dinner was appropriate. But was Kim aware of her pregnancy? I’m pretty sure ‘no raw fish’ is a pretty solid rule while expecting. Unless Kim’s avoiding fish sushi and opting for vegetarian versions, she could be eating dangerous pathogens. But not all think sushi is dangerous–some experts claim that sushi prepared by professionals, in a clean environment, can be a healthy part of a pregnant woman’s diet.

An expert has estimated that Kim will make an initial $5 million from her pregnancy: a million to sell the first baby photos to the tabloids, two million in baby product endorsements, $1.5 million for the documentary rights, and a half a million for a weight loss or fitness endorsement. Basically, she’s carrying precious cargo and should probably quit the raw fish until baby is born! Do you think raw fish is daring, or safe?

Welcome To Plathville: Moriah Plath Visits Her Siblings In Georgia

Sister Wives: Can The Browns Continue To Build On Coyote Pass With Kody Being…