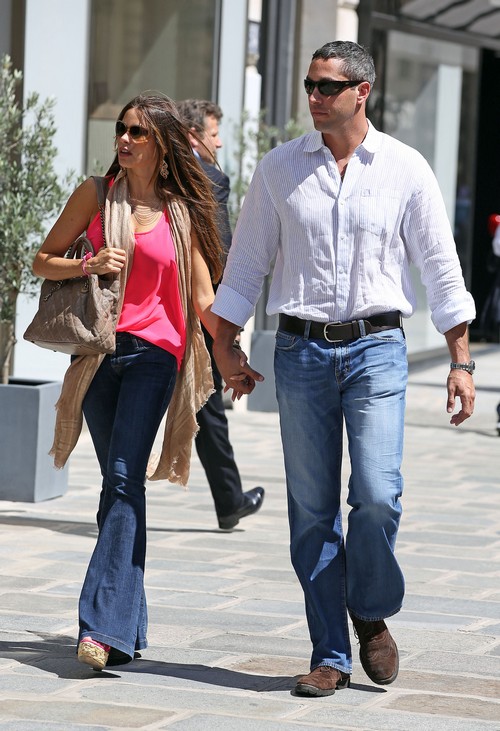 I’ve said it before and I’ll say it again, I have no idea what it is about Nick Loeb that keeps Sofia Vergara wrapped around his finger. The couple reunited a few months ago, but for a brief while it looked like maybe the highest paid television actress had seen the light. Instead she crawled back under Nick’s thumb where she seems to enjoy being.

Apparently on New Year’s Eve Sofia attempted to attended a party at Miami’s Story, with Nick and her son Manolo in tow. Here’s the catch, it was hosted by Sofia’s ex-boyfriend, Chris Paciello. Mixing alcohol with old and current boyfriends usually isn’t the best idea and sure enough, Nick flipped out. Onlookers say he appeared to be irritated just being around Chris. According to Page Six, the couple got into a fight and it spilled over to a neighboring table. Perhaps someone nearby overheard the crap that Nick was saying to his girlfriend and spoke up! Anyway, Nick started pushing and shoving people- including Sofia and eventually he was hauled out of the VIP by security guards.

Of course this morning, her handlers say she was not involved in the altercation but it’s kind of hard to believe that since onlookers at the club said that her dress was torn and she ended up flashing her chest before the situation was brought under control. As for her 20-year old son- well he left in a huff. Apparently even Manolo realizes that his mother has chosen a real winner of a boyfriend to share her life with!

When will this seemingly smart woman decide to live her own life without this clown? Should Sofia drop Nick once and for all? Tell us your thoughts in the comments below!