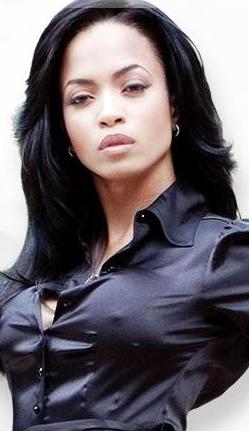 Karrine “Superhead” Steffans – why is anyone named “Superhead”? – is a well recognized author and writer of the Vixen series. As with all writers, Karrine suffers from love that is just too hard for her to handle. The love of her life and ex-BF-person-whatevs, Lil’ Wayne, is currently the focus of her anger, bitterness and resentment. In a series of scathing tweets, Steffans wrote about Lil’ Wayne’s new lyrics – where he explicitly expresses how his current girl gives better oral sex than Steffans did. If that’s too much to stomach, deal with it.

She tweeted, “Emotional Rapper + Emotional Author = Public Display of f***kery.” Followed by, “Adding new chapters to how to ‘Make Love To A Martian’, my 5th book, cuz this n**a here…” In the last tweet, Steffans wrote, “Break up to make up. At the end of the day, it all ends up in a book.” How classy!

The above tweets clearly indicate that Steffans is planning to include her sexual escapades with Lil’ Wayne in this new, tell-all book she’s writing. It’s sure to send that rapper down the rabbit hole of public opinion and crush his testicles. Remember, hell hath no fury on a woman scorned – especially if said woman is an internationally famous author. Lil’ Wayne should know better than to mess with writers… The truth always does come out – almost like those cheesy X-Files episodes where Mulder and Scully are on the edge of finding out the truth, but they never do?

The two go back quite far. Their one-time romantic experience made Steffans head over heels with the rapper and caused her to say this about him, “”Wayne and I have kept a relationship through my two husbands, his three kids, three additional baby mamas, three of his albums, three of my books, three of his arrests, one year in prison and three engagements on his part. We are indestructible and I find it fascinating. I’m in constant contact with this person every day, every other day. He is a part of my being. I’m not me without him. He makes me very happy, [but] I couldn’t be with Wayne. I couldn’t live Wayne’s life.“

There you have it. Sounds like a case of unrequited love if you ask us… If that’s too much to stomach, deal with it – after you cry in the shower for an hour.