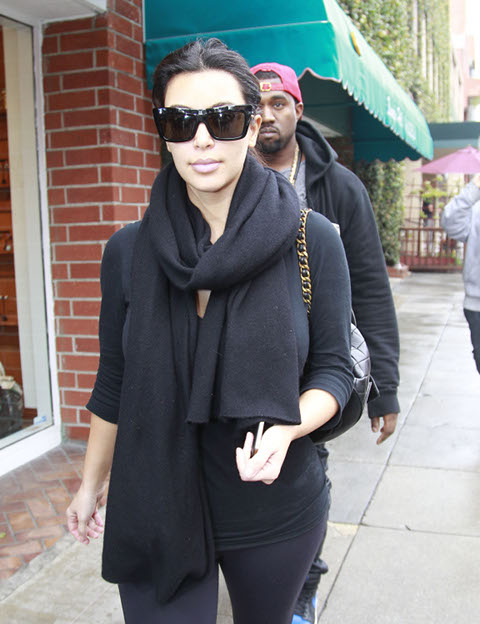 Ever since Kim Kardashian and Kanye West announced they were expecting, we’ve been speculating about what sort of TV we’ll be getting out of this. A pregnant story line on next season of Keeping Up With The Kardashians seems obvious, but what about her own spin off, birthing special, and then a “Raising Baby Kimye” show about motherhood? It seems the natural direction the notoroius fame whore would go, but a new source claims there will be no such thing!

TMZ reported that, against all odds, Kim and Kanye were set on never letting their child on TV. No spin off, no labor special, no anything! They want to “ensure real privacy” for their darling. This is a normal, human, parent thing to want for your child: normalcy, a stable, loving environment. Which is why it raised a red flag. As you probably know, Kim has been under the knife so many times that she can no longer be called human!

But why would a woman whose achieved such fame and fortune not seek the same for her child? If she loves her life so much, why not share it? The only logical conclusion I can think of is that Kim is deeply unhappy and doesn’t want her baby growing up into Kim Kardashian 2.0. Or worse, Rob Kardashian 2.0! The weirdest part? Kim won’t be shy about everything leading up to the birth. Apparently, being “pregnant is great and cute” and worth broadcasting on national television. I’ve never been pregnant, but we’ve all heard about joint swelling, stretchmarks, tiny bladders, and gas. Not so cute, Kim! I’m surprisingly disappointed to be denied access to the baby! Would you watch that show?