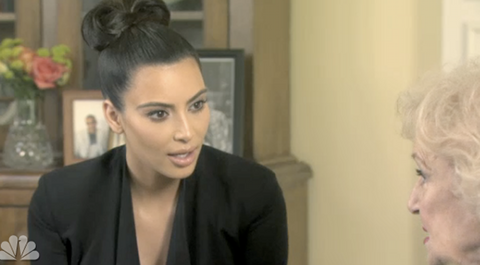 I thought Kim Kardashian was really warning Betty White–for about two seconds, before I watched the whole video! Kim and Kanye West just announced that they’re expecting, which means the Kardashian’s are dominating the internet. In a new video promo for the show “Off Their Rockers”, Betty tells Kim that they are distant cousins, putting her just one heartbeat away from Kanye, because “you Kardashians share everything, right?” Kim curtly replies “back off Betty!“

I’ll admit it: I can’t stand Betty White. I feel like the only person in America who hasn’t jumped on the band wagon. I don’t like the humor. I don’ t like the jokes. It just isn’t funny to me. So I thought the video was super awkward. On top of it, Kim’s face isn’t very convincing. But it’s just a little fun video; she isn’t hoping for an Oscar. So I forgive. It was obviously just a fun little appearance for Kim. It’s weird to me that Kim is willing to joke about Kanye cheating, when he’s got the reputation for it.

You can check out the video below and let us know: Is it funny? It isn’t sincere, but what’s the point? But please note Kim’s drape front sweater: girl was hiding her bump for sure. Do you follow the Betty White train? Will you keep watching her show, or has the humor run its course? Would Kardashian influence do anything for ratings?

Welcome To Plathville: Moriah Plath Visits Her Siblings In Georgia

Sister Wives: Can The Browns Continue To Build On Coyote Pass With Kody Being…