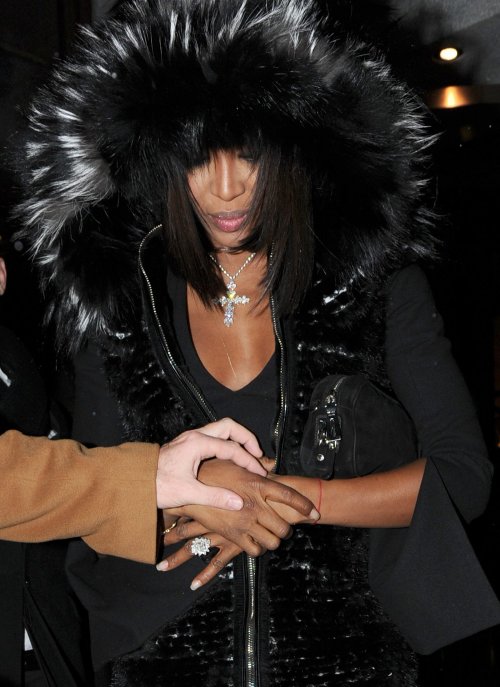 In news that has surfaced suspiciously after the fact – superdiva Naomi Campbell, well known for abusing her assistants, cell phone flinging and generally churlish behavior claims she was brutally attacked and mugged by a gang of thugs in Paris over a month ago. Why is it just making news now? Could be because it’s total merde (French for crap) and she made it up for some reason I can’t comprehend?

Here’s the tale from Naomi’s camp: poor little Naomi was hailing a cab in Paris when out of nowhere she was set upon by a group of thugs, beaten, otherwise assaulted and mugged. As a result of the “brutal attack”, Naomi is now wheelchair bound! The New York Post reported this farce/long overdue karmic episode this morning.

A “source” told NY Post’s Page Six: “It was terrifying. Naomi believes the assailant had been watching her, casing her out, and waited for a moment to strike when she was alone. She was attacked in the street as she hailed a cab, and robbed.” The 42 year old was reportedly robbed of pricey jewels she was wearing. The source added, “Her leg was injured as she was violently pushed to the ground. She was understandably very upset and shaken up.”

But here’s where this gets dodgy – Paris police say there was no complaint filed. A representative from the Paris po-po said: “A high profile celebrity being attacked in Paris would be something everybody remembers. If such a serious crime had taken place then a criminal enquiry would have started by now – especially if the victim ended up in a wheelchair.”

UPDATE**** Now  different Paris police source is saying the crime did happen. The source said, “Two people on a motorbike attempted to steal Ms Campbell’s handbag as she sat in a vehicle on Rue de Moussy. She filed a complaint with police in the 4th arrondissement but she did not agree to a medical examination.” ****

Naomi’s billionaire boyfriend (of course she’s dating a billionaire) Vladimir Doronin reportedly flew his injured girlfriend to the States for treatment rather than having her injuries assessed in Paree. They jetted to Vail, Colorado where she’s being treated by one of the world’s leading orthopedic surgeons J. Richard Steadman (doctor to pro athletes such as Alex Rodriguez.)

Naomi’s been seen out and about in her wheelchair and on crutches, but otherwise did not look bumped or scraped as you would expect from a brutal mugging…

Here are my questions about this highly suspect story:

#1 – If jewels were stolen, were they some of the blood diamonds she’s rumored to wear?  Answer: maybe (and is she still owns blood jewels – shame on her)

#2 – Muggings are rare in Paris and typically happen in poor areas or at train stations. How likely is it that Naomi was hopping the Metro or hanging out with lesser mortals in bereft areas? Answer: not very

#3 – Did I mention Naomi’s dating a billionaire? She stays in luxury suites at pricey hotels and is hauled around by chauffeur driven limo – why was she hailing a cab?  Answer: she wasn’t

#4 – Naomi has security staff provided by her sugar daddy. How likely is it that they stood by and let her get attacked?  Answer: plausible – if she’s as nice to them as she is to other hired help, they might have stood back and giggled while she was set upon by ruffians (okay, that’s wishful thinking on my part – it’s not likely at all)

This is a bizarre report and Naomi’s only comment about the incident to the press was: “I am sorry, I do not talk to press, but I am fine.”  I might question what she considers “fine.” In 2000 she famously threw her cell phone at an assistant injuring her – in  2007, she assaulted her housekeeper – in 2008, she earned a permanent ban from British Airways for arguing with and then spitting in the faces of policemen at Heathrow.

I hope Naomi recovers soon, but I also feel like karmic justice has been delivered.