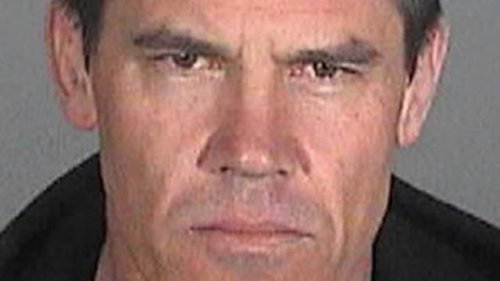 I think Josh Brolin is quite the hunk – he was cowboy sexy in No Country for Old Men and smoldered in a buttoned up way as he channeled a young Tommy Lee Jones in this summer’s Men In Black 3. But even with all his mad thespian skills, Josh couldn’t act sober when stopped by cops on New Year’s and ended up with a seven hour stint in the slammer! But it’s not likely to impair his reputation or life permanently. Josh had to pony up a $250 fine and was let go without further charges. At least his mug shot (above) is super sexy!

A rep for the Santa Monica police department told The Sun newspaper, “He was intoxicated and unable to care for himself. He was booked and released with no further action pending. This was a booking only to hold him until he sobered up. We do not normally file any charges on persons for simple intoxication.”

Josh has a new movie coming out this week – Gangster Squad – but it sounds like he was acting the gangster ahead of the premiere. This was not Brolin’s first run in with the law, or even his second. He’s got a bit of a bad boy streak, doesn’t he?

In the first few months of his marriage to current wife Diane Lane, she called the cops on him resulting in battery charges. And while making the movie W in Louisiana, he was pepper sprayed for getting out of control at a party. Wonder what his dad and Meineke pitchman James Brolin and step-mom Barbra Streisand think about his raising a drunken ruckus?

Cops say they found him “heavily intoxicated” on a Santa Monica sidewalk and took him to jail to sober up since public intoxication is generally a no-no, even for the rich and famous. And where was wife Diane? In Palm Springs giving an award to her on-screen lover Richard Gere for his humanitarian work.