Does Kris Jenner Have A Crush On Daughter Khloe Kardashian Husband Lamar Odom? 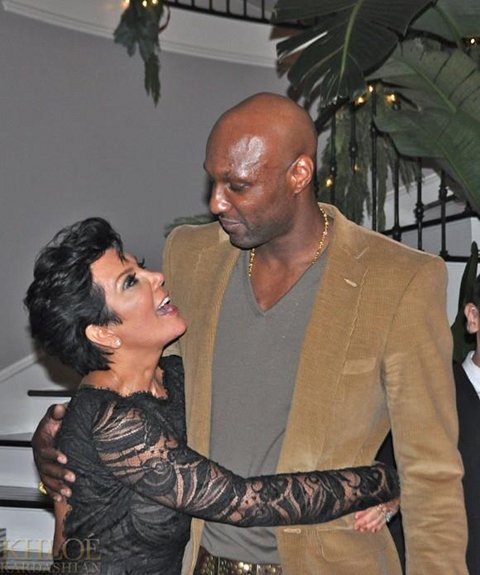 Khloe Kardashian has been struggling to hold her marriage together ever since Lamar Odom decided he prefers to hit clubs solo–the better to dance with other women. Khloe isn’t going down without a fight though, and is reportedly seeking out intensive fertility treatments, hoping a baby will bind Lamar to her for a bit longer. But new tweets between the Kardashian family suggest that Lamar’s infidelity could be closer to home than previously thought. New photos show Khloe’s mom Kris Jenner hugging and flirting with Lamar, and we think she’s crushing!

Kris will do anything for a quick buck, so we wouldn’t be surprised if her PR helpers have recommended she get involved in the Lamar cheating scandal. She isn’t above hurting her children for fame, and so I’m sure that stepping into an already failing marriage seems pretty innocent to her! Kylie Jenner commented on the picture, “they love each other,” which I am sure was meant to describe appropriate mother-son-in-law familial love. But the look in Kris’ eyes, and her body languages, suggests that she’s in for a little more!

Lamar’s face cracks me up. He looks pretty serious, but heavy-lidded, like he’s about to swoop down two feet for the kiss. Khloe doesn’t seem upset by the picture though, and joked, “they are 2 cute!” While I don’t think there’s anything cute about a cheating hubby who hits on your mom, Khloe must forge her own path through life–but here’s hoping her pitfalls aren’t dug out by a greedy mom! Of course, the crush fits in perfectly with the divorce rumors Kris is facing, claiming that hubby Bruce Jenner is fed up with her pimping habits. Could Kris be leaving Bruce for someone a bit more free spirited and youthful?

How Did Dancing With The Stars Contestant Jojo Siwa React To Losing?