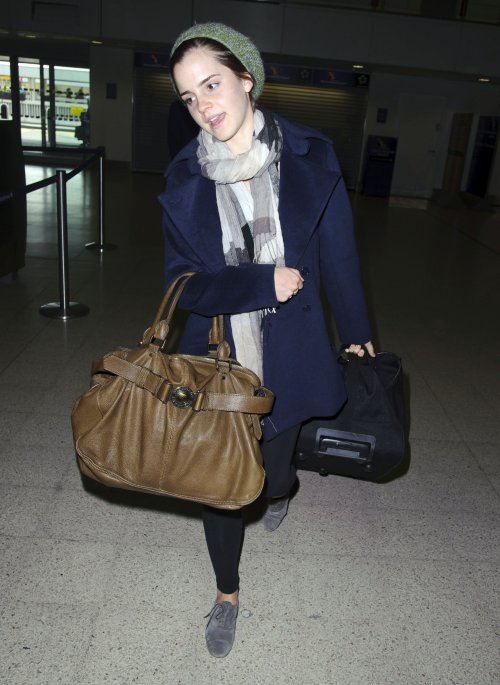 When big name celebs are tagged by US immigration it’s usually because they’re sneaking in drugs or contraband, but for Harry Potter cutie Emma Watson it was her good looks that flagged her. When flying back to the United States, Watson was pulled aside by US immigration officers at New York’s JFK airport because they thought she was a child traveling on her own. This happened over the Christmas holidays where presumably there are a high number of unaccompanied minors being shuttled between parents. Emma is 22 but it seems her fresh faced beauty belies her age because this is a semi-regular occurrence for the ingenue.

When she came through customs, the Perks of Being a Wallflower beauty was asked where her parent or guardian was. After she was pulled aside and had to provide credentials to prove her age, Emma hit up Twitter with comments about her Immigrations ordeal. Emma tweeted: “Passport control: ‘Unaccompanied minor?’ Me: ‘Sorry?’ Passport control: ‘Where is ur guardian?’ Me: ‘I’m 22!!!!!!!’ #neverwearingabackpackagain.” Emma also said, “The really sad thing is that this is not the first time this has happened.“

Emma revealed all this in an interview with Glamour mag where she also said she’s had to become more aware of what she’s wearing and how she behaves in public. Emma told the fashion publication, “You’re being photographed from every angle, so not only do you have to consider how the thing looks, but whether you’re going to be able to sit in it and whether people are going to be able to see up your skirt.“

She also said the paparazzi make her dating life a challenge because “anyone I get photographed with is automatically my boyfriend. So it just makes it look as if I’ve had, like, 6,000 boyfriends!” Emma was also shocked when she was caught smooching a boyfriend at Coachella saying, “It was a huge crowd, and I thought there was no way anyone could get pictures of me, but somehow they found me.“

Seems like Emma could have just flashed her copy of Glamour with her smiling face on the cover to prove she’s of age. Ah well – one day she’ll look back on this incident and wish it was still happening. Remember the grand days when you got carded in a bar rather than handed your cosmo from a glum bartender who says “Here’s your drink ma’am!” Ma’am?? Enjoy it while it lasts Emma!