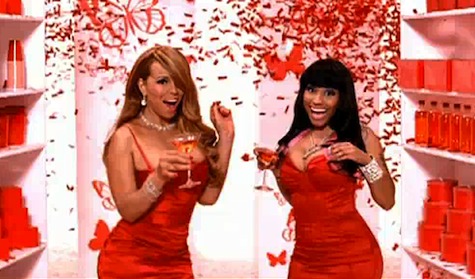 Oh, so now that American Idol is just about to air, this annoying woman wants to talk bad about the Queen… Nicki Minaj? Hhaha! We’re just kidding. As if Nicki could ever be the queen of anything. Mariah Carey is taking shots at the rapper in a new interview she did with Barbara Walters – the woman who loves to bring up things that are no longer relevant.

You might know (or you may not because of poor album sales), Minaj released a track named ‘Hell Yeah’ from her Roman Reloaded: The Re-Up record… and it went something like this: “I’m quick to check a bitch that’s out of line/ Why these bums so mad that the queen on Idol?”

How is this wannabe light-skinned woman going to tell Mariah she is out of line,- it’s like me telling my mom her food tastes rubbish.. pretty damn rude, right? Ha. Let’s not forget Mariah has been singing her heart out for two decades now, while Minaj.. well.. she just got lucky.

Here’s what Mariah had to say about the diss track: “I don’t know. I don’t know what she’s singing. I didn’t know she sang, I thought she rapped or whatever. I think [Idol] is a classic, classy show and it didn’t need this. I really think it was just a crass moment. For me, this is ultimately about the kids, the contestants. I’ve been blessed to live my dream more than half my life so I want to help give that back to someone else.”

In case you weren’t aware, we’re watching AI because of Mariah not Nicki Garbage!