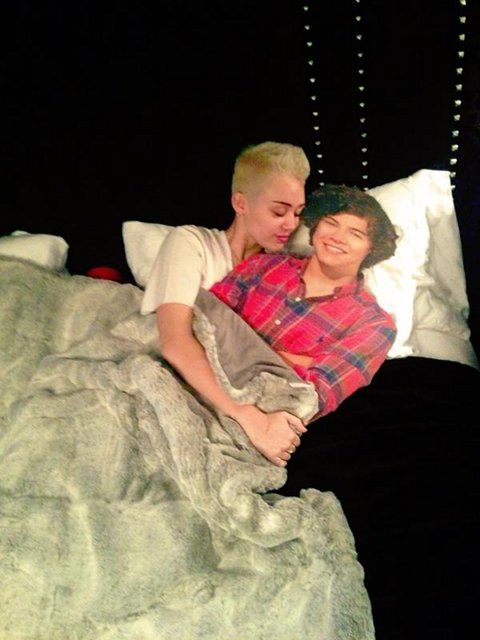 Miley Cyrus is engaged to longtime boyfriend Liam Hemsworth, but that doesn’t mean she’s given up her single life! She partied with strippers on her birthday, has frequent sleepovers with her (gay) boy friends, and even chauffured a sex doll around LA. But now she’s gone a step further–she’s invited another man into her bed. Not just any man, the newly single Harry Styles!

The young singer posted several pictures on her Twitter, showing a life-size cut out of Harry Styles tucked into bed with her. Her tweets explain that it is little sister Noah Cyrus‘ birthday, and she is crazy for Harry! Her birthday gifts included a One Direction calendar, Harry bobble head, and the cut out! So, naturally, the sisters decided to have a mini photo shoot with Taylor Swift‘s most recent ex, sharing pictures with all their fans. 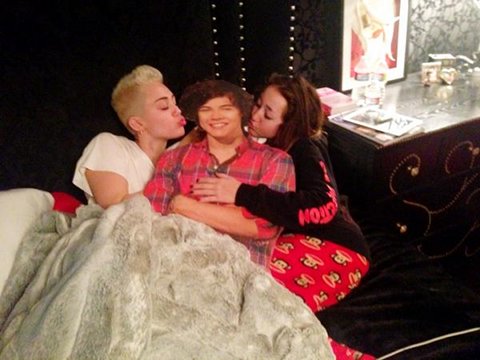 Since his split a few days ago with Taylor, Harry has been seen looking chipper as ever. While I doubt he and Miley have anything going on (she is engaged, and seems very much in love!), I wouldn’t be surprised if he finds a Hollywood hookup, and soon! Being a woman’s man, man about town is Harry’s game, so he’ll want to reestablish himself as the guy to catch. What do you think of Miley’s mini photo shoot?