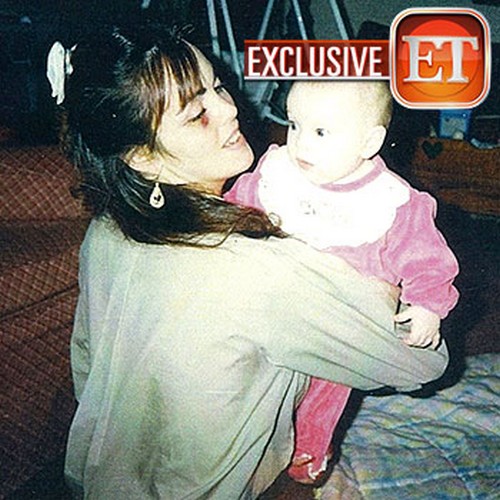 Am I the only one that would like to see the whole Lohan family just kind of disappear? Didn’t think so. I mean, they contribute nothing positive to the entertainment world, but we still hear about every little dysfunctional detail of their lives. Recently Dina Lohan spoke to the New York Daily News and claimed that Michael Lohan physically abused her in front of the kids during their marriage and that is one of the many reasons why her kids (especially Lindsay) are such a mess.  Leave it to power house entertainment site ET to launch into a bit of investigative reporting, perhaps it was an attempt to give Michael a fair shake, and what they uncovered was truly disturbing.

A series of photos have been unearthed that show a very young Dina holding Lindsay, sharing typical mother-daughter moments. The problem is that Dina is sporting a big black eye! The fact that she posed for photos makes me wonder if she was used to having bruises because most women will run from a camera if we have an accident resulting in a shiner!

SEE THE PHOTOS OF DINA WITH THE BLACK EYE HERE!

Of course ET contacted Michael for comment and his BS explanation went something like this, ““Dina hit me with an ice tray, and I turned around and swung … I didn’t punch her. I didn’t do anything deliberately to attack her. I swung out of reflex … she’s twisting everything.”

I’m sure Lindsay has seen a ton of abuse transpire between these two over the years and Dina is right, it hasn’t helped her. Children raised in abusive environments often grow up with a multitude of problems such as the various addictions that Lindsay has publicly dealt with.

Do you think Dina and Michael’s dysfunctional relationship really affected how Lindsay has chosen to live her life? Tell us your thoughts in the comments below!