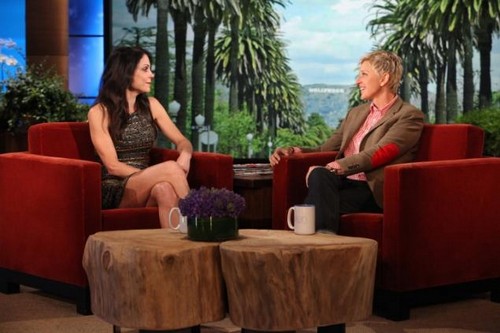 Bethenny Frankel is going through what has got to be one of the roughest times in her life. She announced her separation from hubby of less than three years, Jason Hoppy right before Christmas and has already begun divorce proceedings. The former reality television star is known to be a shrewd business woman that doesn’t hide from conflict so it’s not too surprising that even in the midst of personal drama, she sat down to have a chat with Ellen DeGeneres on Wednesday.

She told Ellen that she believed that if she was going to do a reality show then she had to be honest and show the low points as well as the high. She believed that she and Jason were the real deal and so this split has made her feel like an absolute failure. She also believes that she was briefly a role model for women that want to have it all and now she feels like she has let her fans down. Bethenny Frankel told Ellen,

“I can’t just only be on reality TV and show everything when it’s fairy princess, fairytale and then not take my hits when I have to. I’ve kind of had the best worst year ever … it’s the highs and the lows. The truth is, I wanted to rip the Band-Aid off so it could start to heal.”

That makes sense. Bethenny is the kind of woman that decides how to go about doing something and then she does it, following the necessary path straight down the middle. This divorce hurts but she knows she has to go through it to feel better on the other side.

Are you surprised that she and Jason split? Tell us your thoughts in the comments below!