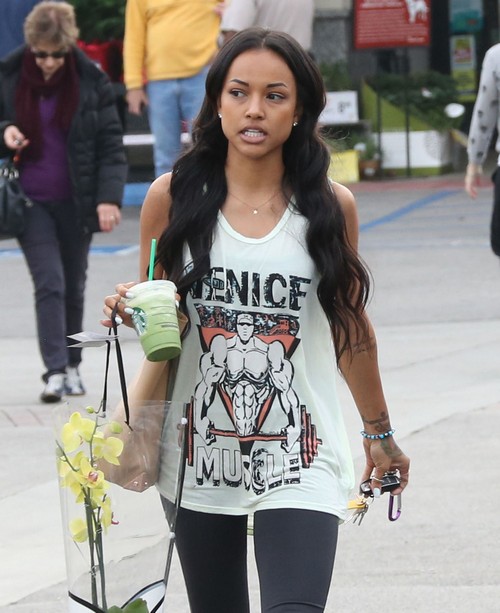 If you’re not exactly familiar with Karrueche Tran‘s name you will know her by affiliation. She’s the other chick in the Chris Brown/Rihanna triangle. She’s the one that was helping Chris hold it together and then move on from all of the drama and legal fallout from putting his fists on Rihanna a few years ago. The couple have been on and off and generally seem pretty tight, until Rihanna comes a calling. Then all bets are off and Karrueche seems to be left in the dust. She recently spoke to website Cotton Kandi about her love life and the messiness that surrounds her saying,

“It’s a lot going on but it could be a lot worse. And that’s how I look at life. I take it for what it is. I move forward, grow from it and at this point, that’s what I’m doing. I’m not gonna sit and dwell and become consumed in that negativity because I could very much be that person, especially when things are so public and so thrown in my face. But like I said, things can be much worse. So I’m good.”

Girlfriend is trying to keep her head up and has focused all of her energies on her unisex clothing line, The Kill- a project that she actually began with Chris when things were a bit better between them. She prides herself on handling things like an adult but admits that if you put her together in a room with Chris and Rihanna it would be really hard to keep it together. Can’t really blame her for feeling that way now can we?

Should Karrueche just step over the dysfunction and keep it moving? Is she better off without Chris in her life? At the end of the day isn’t everyone? Tell us your thoughts in the comments below!