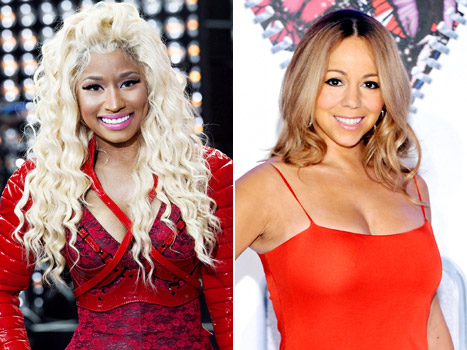 Mariah Carey has admitted to having hired more security guards against Nicki Minaj following their spat on the set of American Idol back in October. You may recall the rapper telling the diva she was sick of the nonsense – referring to the “rude behavior” and comments Minaj heard Mariah make about her.

It was reported at the time that Nicki had muffled under her breath she would “shoot the b**ch” if she wasn’t a judge on the panel, but the 30-year old quickly denied it by releasing a statement. Still, it had Carey worried that Nicki wasn’t a safe person to be around, prompting her to beef up her security as she was taking no risks with the barbie-wannabe.

“It felt like an unsafe work environment,” Mariah told Barbara Walters in an interview on ABC News. “Anytime somebody’s reeling threats at somebody, you know, it’s not appropriate.”

Mariah who had previously told Barbara that she didn’t know Nicki Minaj could actually sing, continued that having a family at home that love her, she wasn’t going to take any risks with the threats Nicki had allegedly made. She added: I’ve got two babies… I’m not going to take any chances. I did hire more security. I felt it was the appropriate thing to do.”