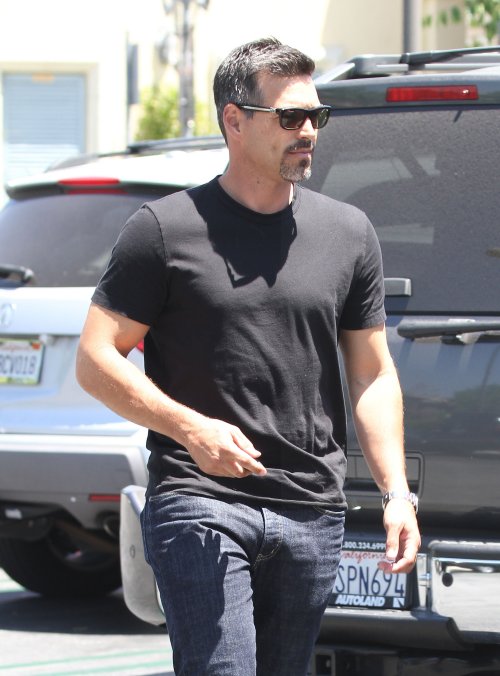 They say you can’t teach an old dog new tricks and Eddie Cibrian is an old cheating dog and it seems monogamy and fidelity are tricks he just can’t learn. Eddie cheated with more women than just LeAnn Rimes when he was hitched to Real Housewives of Beverly Hills star Brandi Glanville. Seems that he was a serial cheater, but there was one hottie he cheated on both Brandi and LeAnn with – waitress Scheana Marie.

Scheana is a waitress at Real Housewive Lisa Vanderpump‘s restaurant SUR. According to RadarOnline, the sexy waitress and cheating dog Eddie first hooked up while he was still married to Brandi and when Scheana was just 20 – over seven years ago. The much younger woman felt instant chemistry. Scheana told RadarOnline, “Originally, I met him 7 years ago. When a really good-looking guy with big dimples wants to take you out for drinks your first question isn’t ‘are you married because you don’t have a ring on your finger?’”

And it wasn’t just a brief dalliance – the two dated for more than six months. How did Eddie manage to keep up his acting career, find time to impregnate then-wife Brandi and still make time to date? Scheana says, “We hung out, it was quite casual and about six months in my mom saw an article and was like, ‘that Eddie guy you are dating, is his last name Cibrian and is he on Third Watch?’ I was like, ‘Yeah, what do you hear?’ And she told me that he and his wife are expecting their second child.”

I give Scheana credit for not intentionally dating a married man. And once she found out he was married and working on his second child with wife Brandi, she was less than thrilled. In fact, she was extremely hurt and upset and reached out to Eddie for an explanation. Scheana says, “He was like, ‘I’m so sorry I lied to you.’ He then switched the conversation and said, ‘by the way, are you still doing the acting thing? I have a project I’m funding, and there’s a role for you that would be great.’”

But then in 2009 after the news broke that Eddie was involved with LeAnn and openly cheating on Brandi, the couple split. And although Eddie was dating LeAnn – in fact had never stopped seeing her – even when both their marriages were breaking up – he reached out to Scheana again.

Scheana said, “As months go by, Eddie gets separated. He then contacts me to go out for drinks. I believed he was separated, so I was happy to go out with him again. But shortly into trying to hang out with him I find out about LeAnn, and I felt like such an idiot!” Scheana ditched cheating Eddie and refused to speak to him after that. Seems she’s smarter than LeAnn who’s still with the adulterer!

Lisa’s RHOBH spinoff Vanderpump Rules centers around her restaurant SUR where Scheana works. Scheana is featured on the show and in the show’s first episode, Brandi – a close friend of Lisa’s – confronts her at work. Brandi screamed at her and called her a hooker and a starfu**er. Yowza!

Scheana told the tabloid she understands Brandi’s anger and hopes one day they can be friends. They certainly have plenty in common – Eddie lied to them both! Now that LeAnn knows Eddie cheated on her too, will it send her reeling back to rehab? I hope she kicks him to the curb without a penny – please tell me she was smart enough to get a pre-nup. Maybe not if she was entranced by those dimples – I will admit he’s not hard on the eyes.