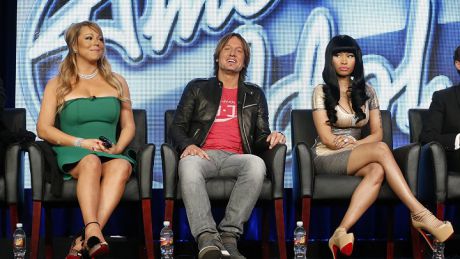 Nicki Minaj has revealed she has a sex tape and even admitted to having watched it WITH Mariah Carey! Wow, okay so this is kinda weird, considering that these two were feuding just three months ago, when Carey was supposedly dissing the rapper when she gave her criticism on the contestants’ singing abilities. So — does this mean they have made up again? But most importantly, why have we not seen the tape? Ha.

We feel kinda left out, but never mind, we’re sure we’ll get to see it one day. The 30-year old, along with the rest of the panel,  including Keith Urban, attended the  Television Critics Association press conference where the promoted the latest season of American Idol – airing on January 16th – where journalists weren’t holding back on what kind of questions they would ask… they dared themselves to ask anything that would create a buzz.

One asked Nicki if she and Mariah were still cold-hearted to each other over their mishap in October, to which she replied: “I put on my sex tape.” While Carey continued: “The whole thing is convoluted. It’s a distraction from the show and a distraction from the contestants.” Minaj agreed: “Every time we try to talk about the contestants, we have to field questions about [this].”

The pop icon added that she feels like “time heals all wounds” while Minaj interrupted: “And we watched my tape… We’re professionals. Have you ever had an argument with someone you work with?”