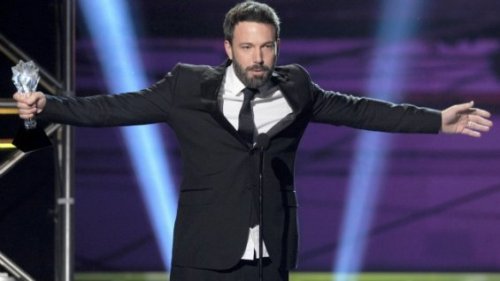 Last night was the Critics Choice Movie Awards and it was a nice change of pace from the stuffier awards shows that dominate the season. Host KTLA’s Sam Rubin was hilarious and he cracked jokes comfortably with the stars. I was pleasantly surprised that most of the nominated and winning stars were there – the exceptions being Daniel Craig and Philip Seymour Hoffman.

The Critics Choice nominees and winners ran much more to my taste than either the Academy Award nominations or People’s Choice Awards results. I really like the categories they use. It allows multiple genres to be recognized. It’s hard to compare drama versus action versus comedy. The knee jerk is to give it to the dramatic film, but as someone who has sat through too many comedies that were tragically unfunny, I think comedy is more of a challenge. And action movies are often disregarded, but it’s a challenge to channel rage, fear and a range of human emotions against a green screen while pretending aliens are after you…

Here are the winners in each of the categories along with some highlights from Thursday night’s show on the CW:

Best Acting Ensemble – Silver Linings Playbook  Cast members Jennifer Lawrence, Bradley Cooper, Robert DeNiro, Chris Tucker and Jackie Weaver were there and Bradley spoke for the group. He said the win was a shock, recognized Julia Styles and the other cast members that weren’t there. He credit director David O. Russell for their award.

Best Young Actor/Actress – Quvenzhane Wallis (Beasts of the Southern Wild)  She may take the Oscar this year – her performance was stunning. This would make her the youngest Oscar recipient. She displayed incredible stage presence when she accepted her award, marching confidently to the mic and reading her speech from her iPhone. Too cute!

Best Actress in an Action Movie – Jennifer Lawrence (Hunger Games) In her second win of the night, Jennifer accepted her award quipping, “Critics aren’t so bad” to a room full of laughter. She groused that shooting was so hot (temp wise) and acknowledged author Suzanne Collins for creating such a strong character and Gary Ross for great direction.

Best Actor in an Action Movie – Daniel Craig (Skyfall)  I guess 007 was too cool to come across the pond to accept the award because he was not there.

Best Action Movie – Skyfall – Gary Barber, chairman of MGM, accepted for the Bond film. No cast? No director? They must not have thought they had a shot at winning.

Best Supporting Actress – Anne Hathaway (Les Miserables) Her award was presented by the charming Eddie Redmayne. Anne mentioned (to much laughter) that the critics spelled her name wrong in the nominations section. She singled out Hugh Jackman, Russell Crowe and Tom Hooper.

Best Supporting Actor – Philip Seymour Hoffman (The Master) PSH didn’t show up. I love him. I will never forget his breakout role in Boogie Nights!

Genius Award Louis XIII – Judd Apatow – The funnyman gave a hysterical acceptance speech where he listed off all the people he beat – Steven Spielberg, Ang Lee, Tommy Lee Jones and Daniel Day-Lewis . But Rebel Wilson proved a hard act to follow with her hilarious intro for his award. Also, he forced the audience to give him a standing O. Not cool, but maybe his only chance for one, so okay. 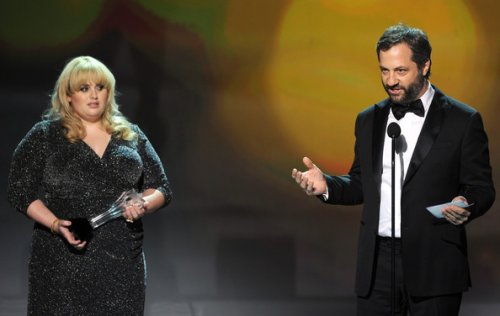 Best Sci-Fi or Horror Movie – Looper – Producers, writers, directors and most importantly Joseph-Gordon Levitt and Emily Blunt accepted. I liked this movie, but the time traveling incest (like Back to the Future gone bad) icked me out. If you didn’t notice the incest, rewatch with this in mind (spoiler alert) JGL is the young boy he meets in the past and Emily plays his/and the boy’s Mom!

Best Actress in a Comedy – Jennifer Lawrence (Silver Linings Playbook) This was her third award of the night and she gave such a sweet speech about her co-stars and Bradley Cooper in particular saying he “took her breath away” and that when she saw the film onscreen, “he broke her heart and then put it back together again.”

Best Actor in a Comedy – Bradley Cooper (Silver Linings Playbook) Bradley is totally under-rated as an actor – probably because he’s done so much high earning crap like The Hangover, but he can really act his face off. I’m watching Alias now (never saw it back in the day) and his dramatic work is a revelation. He devoted most of his speech to praising David O. Russell’s powerful and moving script and revealed (surprise) that he wouldn’t have had the part if Robert DeNiro hadn’t advocated for him. And most amazing of all, he thanked the crew and singled many of them out by name. What a guy!

There was a life sized Ted swigging a martini and seemingly lamenting his namesake film losing to SLPB. Fun!

Best Director – Ben Affleck (Argo) If it couldn’t be Kathryn Bigelow, I’m glad it was Ben. This again makes me wonder why he was snubbed with no nomination for an Oscar. He scored a huge standing O when he took the stage. He said “I would like to thank the Academy” and the crowd went wild. Then Ben added, “I’m kidding – this is the one that counts.” Take that Academy snub – I like that he mentioned the snub and poked fun at himself. He also gave a parting shout out to wife Jennifer Garner that was sweetly romantic. Love him!

Best Actress – Jessica Chastain (Zero Dark Thirty) – This is a nice surprise. I love her and this movie was harrowing and brilliant. She thanked lots of people and the other nominees, but then broke into tears thanking Kathryn Bigelow for allowing her to play the part. Jessica left us with a quote from Bertolt Brecht “Unhappy the land that is in need of heroes.” Show off! Beauty, brains and talent. (envy)

Best Actor – Daniel Day-Lewis (Lincoln) – No surprise here. He’s always brilliant. He made one bad movie – Eversmile New Jersey – and the rest have been excellent. Plus he’s beautiful. Swoon… Daniel speaks like a shy man who doesn’t get out much. He seems to have no ego and struggled through his acceptance speech. He also made a delightful if awkward joke about having to use the bathroom in trailers because the event was in a hangar. What a charmer!

Best Picture – Argo – This was the second win for Ben Affleck for the evening but he didn’t give the speech. That was (to me) amazingly gracious – James Cameron wouldn’t have given up the mic. Instead, producer Grant Heslov gave out the thank you’s.