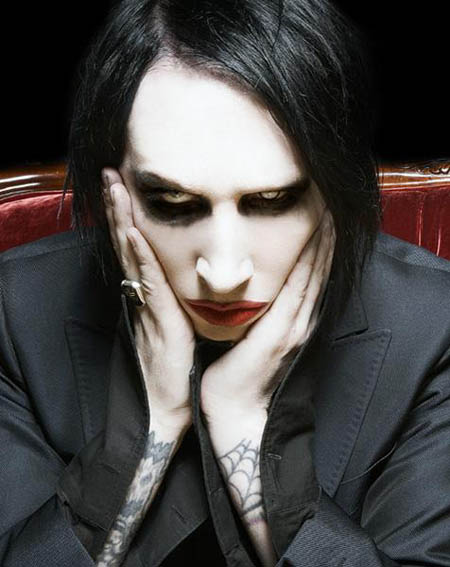 Marilyn Manson is a cool musician, a cool artist, and an even cooler lyricist, but what Marilyn Manson is not, is engaged. That makes no sense, we know, but if you read the story below it will all become clearer than a moonlit lake with dancing gypsies. According to TMZ, “Manson has sicced his lawyers on self-proclaimed ‘rock vixen’ Seraphim Ward – claiming she leaked false stories to various media outlets saying Manson asked for her hand in marriage last year.” Quirky, yes?

Several media outlets picked up the story a few days ago and ran with it like hot cakes at a hot cake convention. However, Manson’s people never officially confirmed the story, but it was credible, because Ward dated one of Manson’s band members a few years ago. Manson wasn’t impressed that Ward made these ludicrous claims, so he asked his legal eagles to send Ward a letter demanding an apology. According to the document, Ward not only said that she was engaged to Manson, but she also claimed that he is a “racist, Nazi sympathizer.” The letter also states that Manson “has had no romantic or other association with Ward,” and implies that Ward is a fame whoring, publicity seeking idiot. (Not in so many words, though.)

The lawyers are threatening to sue if he doesn’t keep her mouth shut. We would too, you know? If a random, crazy-assed, big-lipped bimbo without a career were to say these things about us, we’d ask our friend Tucci to tie her to a cement block and let her swim with the fishies. (Okay, we wouldn’t. We love animals too much.)

Sweet dreams are so not made of this.

What will you do Hollywood Hiccup readers? Will you sue if someone were to spread these allegations about you? Do you think Manson is correct in his assumption that Ward is a fame whore? Shoot off in the comments below and let us know!