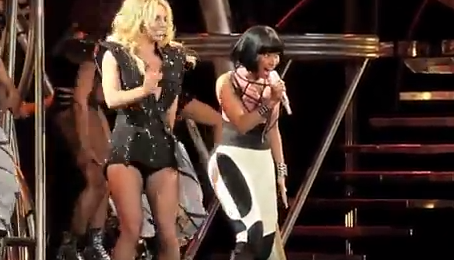 Britney Spears seemed to be on track: she was cleaning up her legal drama, employed, and engaged. But as of today, she’s quit The X Factor, and has split from longtime fiance Jason Trawick–definitely a few steps back! The singer, who has struggled with drug use and mental instability, isn’t worried though! She’s already working out her next gig! It isn’t as easy as being a judge, but it will get her back into musical performance, which seems to be where she wants to be!

TMZ reported that Britney is in the early stages of developing a show on the Vegas Strip, following in the footsteps of many other celebs! Not only is she working on her 8th studio album, which may feature a world tour, her people are in “negotiations are with one of the Caesars group properties, and they have ‘been wooing her for awhile.'”

Britney wouldn’t be the first singer to use Vegas as a platform for a comeback. Not only can she reach a lot of fans with minimal travel on her part, she’d set herself up to make a comfortable paycheck. During her residency, Celine Dion made a cool $100 million, and experts guess that Britney could make even more!

I don’t know how Britney could hope to juggle the album, show, and her kids, but I trust that she’ll work out a system that benefits her kids and her health! Britney has been trying to restabilize herself for years, and it would be great to see her back on her feet! Would you see a Britney show in Vegas?