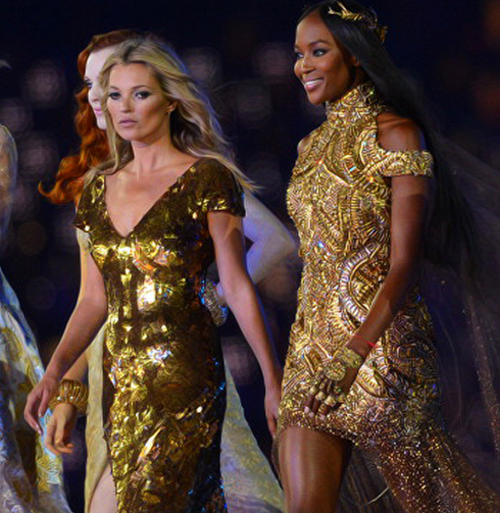 If you were on of the billions of people who watched the Olympics Closing Ceremony last year, you would have seen Naomi Campbell, Kate Moss and other models in a fashion segment as they walked down the runway is expensive gowns, jewellery — which was all to present the style and fashion that British designers have become so famous for doing.

So of course it wouldn’t be a shock to hear that supermodel Naomi was suffering from panic attacks just minutes before she was set to bedazzle the viewers in her sparkling outfit. The 42-year old explained that she started confusing herself as to where she needed to stand, which direction she would have to walk in and where to make her exit as all the models arrived in trucks.

Campbell says she hadn’t rehearsed it on the actual stage so it only started to hit her once she got in the truck that she could be messing up the entire performance if she doesn’t get her act together: “We stood on this truck [before the show]… It made me totally nervous, that we were all stuffed into this truck alone,” she told Interview.

“No-one from the team [who wasn’t performing] was allowed in. There was no-one to help you. I got panicked. ‘Am I standing facing the right way or do I need to face the other way?’ I was afraid that I would get stuck, and that was the case. But the others weren’t allowed to help me. There was some rule that prohibited it. And so it was; I went back down the stairs and got stuck.”

Luckily, nothing went wrong. In fact, she was pretty damn amazing!