The Relationship Is Getting Serious: Lindsay Lohan Meets The Wanted Max George’s Parents 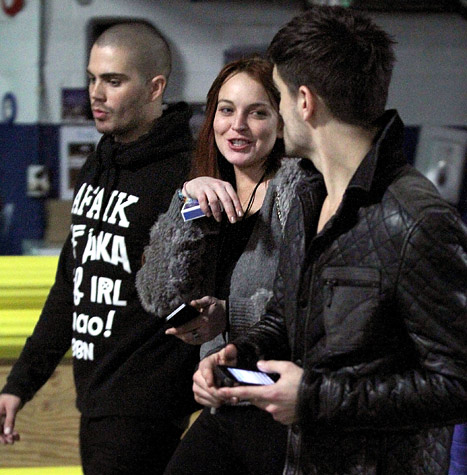 Let’s all hope she was sober when she met them. According to reports, Lindsay Lohan has met up with Max George‘s parents as the two are taking their relationship one step further. The two, who have been dating since November when LiLo got arrested for assault, are said to be head-over-heels for each other… Max truly cares for Lindsay and she.. well… we’re assuming she does, too.

TMZ reports that the actress’ recent visit to London was so that she can get to know Max’s parents who happen to live in Manchester. Lohan and George’s family got on really well, in fact it was all so nice and cozy that she even told them she would be coming back sometime this year to do it all over again. Could this mean Lindsay has finally found a sensible dude?!

We sure do hope so. The Wanted‘s spokesperson and Lilo’s team continue to deny that these two are dating despite the fact that 26-year old has been spending a lot of time with Max since November’s incident; Max has even gone to refer to the actress as a “groupie” for following their tour bus — but he seemed to have said it in a jokingly manner.

Nevertheless, she’s still spending a lot of time with someone who she claims to be not in a relationship with! Aw wells, we just hope she can lay off the drugs for sometime and find herself a dude that can help her on that path.. we still think Max and LiLo are dating but if their team denies it then they must be telling the truth, right? … NOT!