Jennifer Aniston Getting Ready For Twins – Inside Her Birth Plan 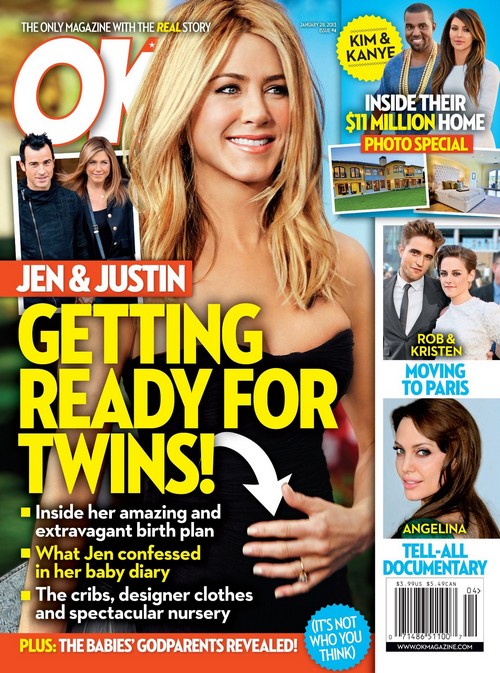 The current issue of OK! Magazine has the cover story, “Jen & Justin Getting Ready For Twins.”  Another week another magazine reporting that Jennifer Aniston is pregnant or getting pregnant or thinking of getting pregnant.  The problem is she never gives birth.  In the past couple of years according to the tabloids, Jennifer has been pregnant 500 times.  OK! protects themselves this week by claiming she is not pregnant yet, but she has a plan and is getting ready.

Now that Jennifer has had a boyfriend for more than a second (Justin Theroux), the tabs are convinced the big announcement will come any day.  So if they keep printing it, eventually they will be right.  OK! Magazine prides themselves as the magazine with the real story, they may want to change that tag line 🙂

The magazine goes on to claim that they have the inside scoop on her amazing and extravagant birth plans.  They’ve gotten a peek into her baby diary.  They are even privy to the baby crib, designer clothes and spectacular nursery.

What do you think Hiccupers?  Is this just groundless speculation by OK! to grab some traffic or do you believe Jennifer is pregnant this time?  Hit the comments and let us know your thoughts?