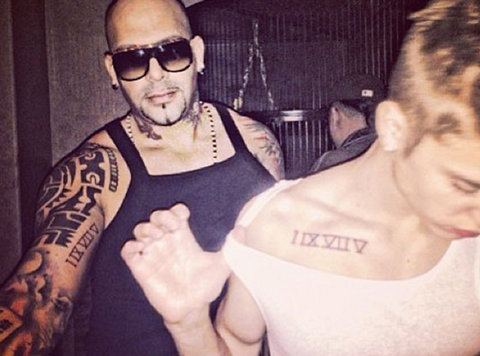 Justin Bieber is addicted to tattoos. The singer is premiering a new one every few weeks. I swear, it looks like he’s had fans put their worst tattoo ideas into a hat, and every month he draws one out. We’ve all see his cartoon owl, the face of Jesus, an praying hands floating on roses, but this new one takes the cake! Justin showed off his new ink, which is located right below his collarbone on the right side. It reads “I IX VII V,” and many of you are probably wondering why the sequence 1-9-7-5 is so critical! Well, apparently no one on site knew enough about roman numerals to correct it–he wanted it to read 1975, which would have been “MCMLXXV.” At  least he isn’t alone in his misery–music producer Jamal Rashid got a matching tat on his right bicep.

So what’s the significance of 1975? I’m thinking it has to be music related–why else would Rashid get one too? “Great minds think alike,” Rashid posted. “Same Tatts spiritual meanings..” I’m at a total loss–absolutely no historical significance is popping into my head! Can you think of any rhyme or reason to the new ink? I think it’s time for Justin to cut himself off. Don’t they say you should want a tattoo for a year before you get it done? I doubt he’s planned these out so much! Maybe he’s just trying to relaim himself after Selena Gomez kicked him to the curb after one-too-many cheating scandals! I wonder if this will be a tattoo that gets lasered off in a few decades. What do you make of it, dear readers? Any idea what it means?