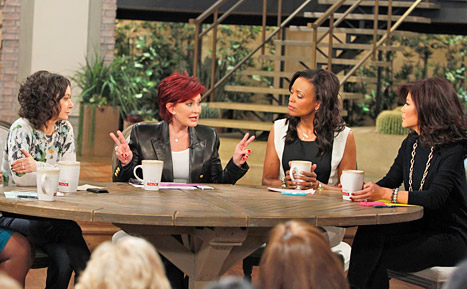 We never knew how serious this argument between these two had actually gotten, until now. Sharon Osbourne has lashed out at Lady Gaga who she claims promotes violence through her “little monsters” towards other people, with daughter Kelly Osbourne being the latest victim to face death threats on her Twitter page.

You may recall Gaga blaming Kelly for receiving death threats from her fans due to her mocking and criticizing the singer’s outfits on E!’s Fashion Police, and what made things worse was that instead of having sent this message to her privately, the singer directly tweeted Kelly she was at fault for her “little monsters” reacting the way they do.

This whole argument happened to go back and forth, but now Sharon is using her platform on The Talk to publicly hit back at Gaga for the comments she has made towards her and her family which have led to even more hatred from other people. Osbourne explains that her son Jack Osbourne has now been dragged into it, explaining how she has seen comments from Gaga’s fans insulting his multiple sclerosis condition, saying that there’s nothing wrong with him, he’s “just a retard”.

“Don’t let your fans be so hideously damaging, hurtful, violent… on your own website,” Osbourne declared on US show The Talk. “If you are the Mother Monster, monitor it. Why haven’t you, as a responsible young woman, said, ‘No violence on my website, no violence, no threats, no violence’? Everything is guns, guns, guns. This is not right, and she should be stopped.”

Sharon vented on the show, making her statement on how Gaga has not been a good role model to her millions of fans who literally do whatever she tells them to. “Why haven’t you, as a responsible young woman, said, ‘No violence on my website, no violence, no threats, no violence’? Everything is guns, guns, guns. This is not right, and she should be stopped.”

See the video below! We kinda feel bad for Sharon – it’s a good thing that she made this public, maybe Gaga will back off and stop trying to seek for attention!