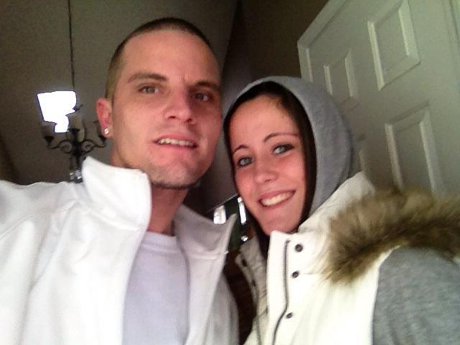 I don’t think there is anything more sad than watching Jenelle Evans flop like a fish out of water. The newly married, possible drug addict reality TV star mom lost custody of her baby Jace to her mom Barbara Evans just after his birth. Since then, Jenelle has been in and out of jail, has had several drug charges, a violent boyfriend, and a husband. The only thing consistent about her life is that Jace isn’t a part of it. Viewers of Teen Mom 2 can see her brief encounters with the toddler, which usually end in screaming matches with Barbara before she curses and slams the door.

We’re sad to report that Jenelle announced through Star Magazine, print edition January 28, 2013, that she is expecting. “I missed a few birth control pills, and found out I was pregnant at a doctor’s appointment. I was really surprised. This wasn’t planned, but it happened, so we’re taking it as we go. Courtland [Rogers] and I are happy and excited now. We know having a child can be difficult, but we’re going to do our best.” Apparently, Jenelle’s doctor advised her to remove her birth control implant and switch to the pill after realizing new medications wouldn’t mix well with the implant. I don’t understand why she would choose the pill when so many other, less involved, forms of birth control exist!

I hate to be negative and judgmental, but I just can’t celebrate this news. Jenelle has all but abandoned her baby. Her life is a mess–she is in and out of school, off and on drugs, in and out of court, and seems like a total train wreck. Since giving birth to Jace, she hasn’t been able to get it together long enough to win custody. How is she going to raise a healthy baby if she doesn’t even care for her first? How can they do their best without Jace? None of this makes sense! What do you think of Jenelle’s news?