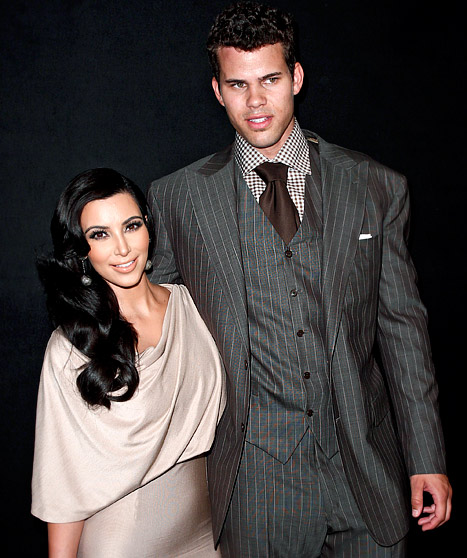 Someone get this girl some tissues. Kim Kardashian can not stand when people mock marriage to Kris Humphries. The reality star has admitted to feeling frustrated and annoyed over the fact that her fans continue to make fun of her 72-day marriage to the NBA player as she cited her reason as “irreconcilable differences” to what had caused the relationship to suddenly fall apart.

Just over a year later, and Kim announces she is expecting a baby to Kanye West – who she has been dating since February 2011 – so of course it’s going to get on her nerves when she constantly sees the name ‘Kris Humphries’ because the 32-year old has made it very clear she has moved on and so should he, no matter if Kim really did only marry him for money. At the end of the day, it happens — you just have to get over it, don’t you?

However, when Kim pubclicly spoke on how she felt about people making fun of her marriage problems, such as ‘Things That Lasted Longer Than Kim’s Marriage’, she made herself look pretty stupid when she said the joke made no sense since she’s still married to Humphries. She definitely didn’t understand the joke of it. LOLz! Here’s what she said:

“I just don’t like all the jokes,” she insisted. “Things ‘longer than Kim’s marriage’. Technically I’m still married, so that joke doesn’t really work… Give it up, people. The marriage] is going on its second year, and that’s really tough because I want to move on. I really want to move on with my life.”

Kim sounds very frustrated about the whole thing, but it kinda seems like it’s deeper than just having to see the jokes that people make about her 72-day marriage. Kardashian had told the TODAY show earlier this week that she and her rapper boyfriend Kanye have been talking about tying the knot in the near future, but currently, their main priority remains to be baby Kimye — but still, it proves that Kim and Kanye want to take their relationship to another level but they are locked down by Kris’ fraud claims.

Kim explained: “[Kris is] suing me for an annulment… He’s claiming that I [committed fraud]… Who would ever do that? It’s just not who I am. All those fake and fraud rumors got started because of that, and we have to deal with that and handle that. I knew the whole world was going to bash me. I knew that.”

On how she managed to get out of a troubled romance, Kim continued: “I said to myself, ‘What’s more important? My life and my happiness, or what the whole world thinks of me?’ [Staying married] would be vain. That would be fake. That would be doing it for publicity.”