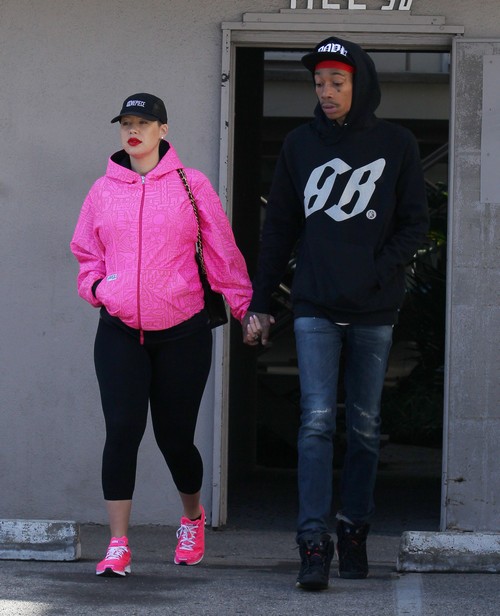 Wowza – and they kept it a secret? Amber Rose has married Wiz Khalifa, according to sources. Rose, who is set to give birth any day now, was spotted out in Los Angeles earlier this week where she was handed a turtle-shaped ice-cream by a photographer. What she said afterwards was kind of unexpected.

As she grabbed the ice-cream, she said: “My husband loves Ninja Turtles.” Wait – what did she just say? “Husband” right? We find it very shocking how Amber could get married to the rapper without even scooping some kind of magazine deal, knowing that she seems like one of those women who’d take the check straight away if it was offered to her.

But, the whole “getting married” thing wasn’t too surprising to us, knowing that in an interview Wiz did with HOT97 last year, he confirmed plans on getting married to his beloved fiancee before she gives birth to their baby boy. Their plans were to get hitched and throw a big ceremony afterwards so that Amber could fit in her normal-size dresses. Ha!

”We’re going to get, like, licensed marriage – yeah, like in a couple of weeks we’ll have that done,” he said. “You just sign the papers or whatever and it’s like a legal thing – it’s like, ‘Bam, you’re married’. When you have the ceremony, that’s when you invite the family, [Rose] could fit into a dress, and then like, you know, nieces, nephews.”

Congrats to the newly-married couple.