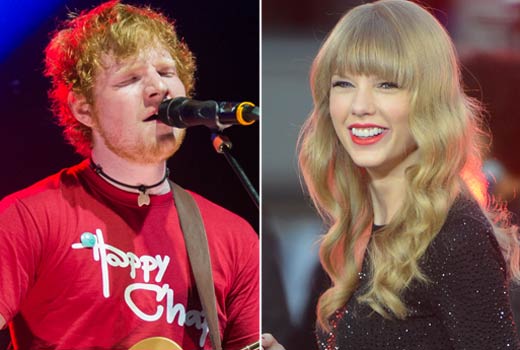 Ed Sheeran loves Taylor Swift‘s songs and has now praised the singer for her “cool” songwriting. According to Billboard, Sheeran has told them how much he adores listening to Swift’s breakup songs, but not only that, Ed thinks that being the most successful female songwriter for the last few years who writes 100% of her own hits is very inspiring.

The 21-year old is currently supporting Taylor on her North American tour and being a stranger to Swift is something he definitely isn’t, having worked on her recent album for the track ‘Everything Has Changed’. The ginger fella, who has been linked to the singer in recent months tells Billboard that Tay’s music is very heartfelt and real, adding that he believes she knows what she’s doing with how she portrays people in her songs.

I’m a fan of Taylor’s, not just her work but her ethics and that she writes her hits herself and she’s probably the only woman in her position in the industry who writes 100 percent of her hits. It’s a very cool thing,” he explained. “The song that ended up on her record was pretty much 100 percent her idea in the first place; I did what I could to help, but she definitely knows what she’s doing.”

Adding on what he thinks the experience will be like to open for Taylor’s show at her concert, he added: “I don’t know what’s going to happen. I’ve never really played to crowds that big before, so I’m hoping it goes down well. The longest I’ve played in a stadium was six songs at Wembley Stadium for some big radio event. That was mental. So doing that with Taylor night after night is definitely going to be an experience.”