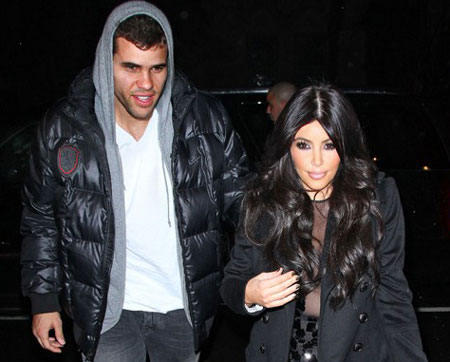 Kim Kardashian is tired of Kris Humphries being brought up wherever she goes. The questions about her marriage to the NBA star keep on being made during interviews, while most of them are always the same.. when will she finally just sort the whole thing out? Kim could have been a free woman a long time ago, had she just admitted that her failed marriage to Kris was a fraud, but Kim says that wasn’t the case; their marriage was real and she loved him very much.

However, now that their marriage is going into its second year, Kardashian has no problem to finally annul the entire thing and admit to having used Kris as someone she could cash in from, having made a reported $16 million from the wedding alone. The 32-year old is expecting her first child to rapper Kanye West and doesn’t want to have to go to trial and make such a big fuss out of something so small, so she has agreed on giving Kris what he wants.

“Kim has made it known that she is ready to give Kris an annulment because she just wants to move on with her life. If she doesn’t give an annulment, Kim will be forced to testify at a trial after her baby is born this summer, which is the last thing she will want to do,” a source told RadarOnline.

However, a source explains that Kris Jenner is not fully convinced that Kim’s annulment wouldn’t hurt the brand. Having a billion dollar empire – thanks to their clothing collection, nail polish, makeup lines, etc – could be at serious risk if Jenner’s daughter goes through with it because there’s never a certainty that people will just think “Oh, she only did it because she wants to move on with her life”. Some may still think that she really did only marry the guy for the money.

“Kim’s momager, Kris Jenner is adamantly protesting to her daughter’s idea [of giving in] because of the possible ramifications it could have for the Kardashian empire. Kris is concerned about the negative press and criticism Kim will get if she goes through with it. Kris’ main concern is how E! would react to Kim’s decision since the network aired their wedding special,” the source explained. “Kim’s baby daddy, Kanye West, doesn’t understand why she hasn’t already just given Kris the annulment,” added the RadarOnline source.