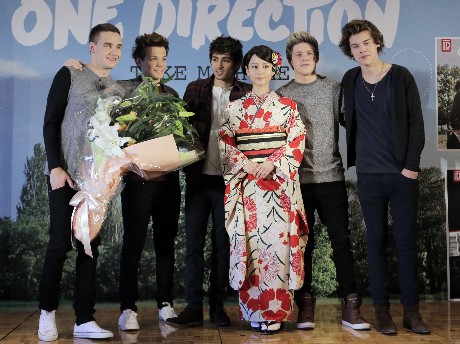 One Direction were kinda embarrassed when their fans in Japan would talk to them and they couldn’t reply – constantly having to ask their manager to translate what was being said. Now, it has been reported that the five boys will be taking YouTube language courses online in hopes that they can pick up a few words that would be enough to please their teenage fans — it’s better than nothing  right? Ha!

Their careers aren’t slowing down – nor will it anytime soon – so instead of always saying “Me no speak your language, sorry”, they can make an effort by speaking some basic words for each of the countries they visit as part of their world tour. Their visit to Japan was far from smooth, not just because Zayn was puking everywhere, but because non of them communicated with the screaming girls, which had them thinking to themselves “what could be do?”. Well.. a source explained to The Sun:

“The press conference in Japan got embarrassing because the boys’ culture shock was so obvious,” a supposed friend told the newspaper. “Over the weekend they vowed to learn at least 20 of the most common words in the languages of the countries they’re visiting before they land there.”

Hoping to stop having these awkward moments in countries they are not too familiar with, the source continued: “They think it will avoid embarrassing moments and build up a bond with fans. They’re just going to use YouTube tutorials to brush up on their language skills and think that’s going to be enough.”