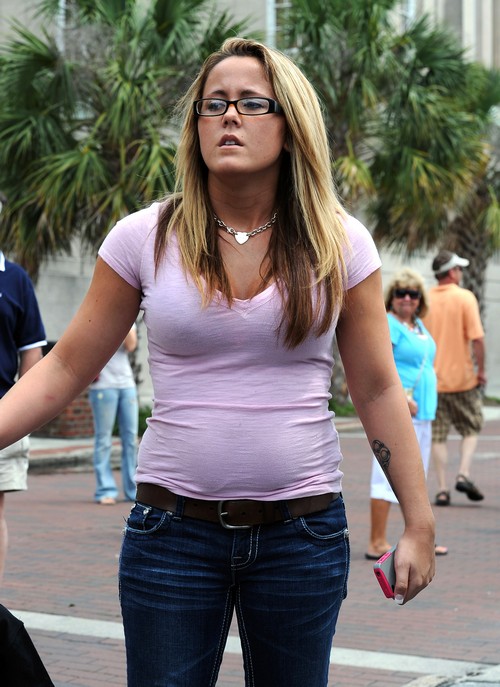 For once there’s a bit of news about Jenelle Evans that has nothing to do with the status of her love life! The latest episode of Teen Mom shows the reality television star taunting and bullying her friend Amber as the girl moves out in an attempt to get away from Jenelle and the constant drama that she carries with her. Even Jenelle admitted on her Twitter than she is a total bitch, but then she informed her fans that she and Amber have since managed to patch up their friendship. Apparently Jenelle saw that she was wrong and offered an apology to one of her oldest pals.

No one should be surprised that Jenelle and Amber have reconnected since Jenelle’s consistent pattern is to flip out, throw people out of her life and then run back to them and temporarily fix things. We’ve seen her do it with pretty much every guy that she has dated over the last couple of years so it makes sense that she would also have a revolving door with the few girl friends that are a part of her life.

I can also hedge a bet that this friendship won’t last any more than those fleeting relationships have. Jenelle is immature and completely incapable of maintaining any type of friendship with anyone. She either throws a childish tantrum or else ends up under the influence of something and ends up in what amounts to a domestic dispute or a fistfight.  Sure she apologized to Amber, but I have faith in her ability to screw it up all over again, don’t you?  We’ll know that Jenelle has begun to grow up when she manages to keep someone, anyone in her life for more than a few months. Until then it just shows that Jenelle is handed lessons but never learns anything from them. How long will it be before her next blowout with Amber? Tell us your thoughts in the comments below!

Did Teen Mom 2 Kailyn Lowry’s Ex-Husband Javi Marroquin Use Her For Fame?