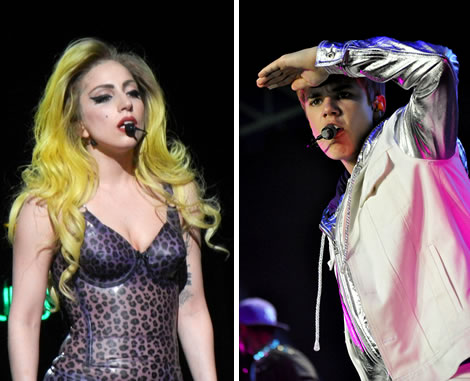 Justin Bieber has overtaken Lady Gaga on Twitter to become the most-followed person on the social-networking website. The teen-sensation who shows his butt earlier this week, has a total of 33.321 million followers while mother Monster wasn’t far behind with 33.320m followers — just a thousand more. Could she catch up again? Who knows.

It’s nothing but love with Gaga though. She tweeted out to Justin Bieber, congratulating him after he overtook her yesterday evening. “So proud of @justinbieber and all the Beliebers! I’m only happy to see your fans growing in size, you all deserve it! Monsters support you,” GaGa tweeted upon finding out she was no longer holding the top spot on the micro-blogging site.

In other news, Rihanna is still the most liked person on Facebook with a total of 65.579m, thanks to the dozens of naked pictures she posts of herself. Who wouldn’t want to like that nice Bajan body? Ha! See below for the top 10 most followed people on Twitter. We’re kinda surprised YouTube made it in the list. Wowza!

The Top 10 most-followed people on Twitter are as follows: