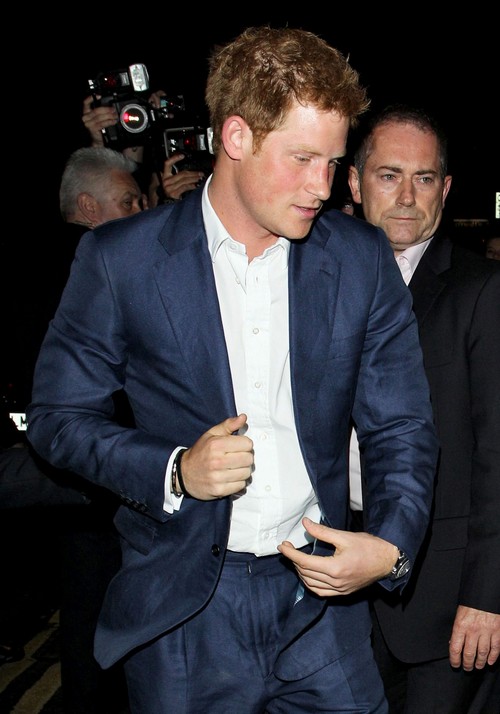 Prince Harry was born into the spotlight as third in line to the British throne, outranked only by older brother Prince William and father Prince Charles. Unlike other royals, Harry’s had a rougher time adapting to his unusual life, and has been involved in plenty of royal scandals—including marijuana use, wild partying, and public drunkenness. That’s not to say that he doesn’t have responsible moments, or that he doesn’t look smashing in a suit! Prince Harry is just finishing up a 20-week deployment in Afghanistan as an Apache helicopter pilot, and in a new interview about his time abroad he’s opened up about his infamous Las Vegas party, during which he stripped nude and romped around with naked women.

“I probably let myself down, I let my family down, I let other people down,” Harry confessed. “But it was probably a classic example of me probably being too much army, and not enough prince. It’s a simple case of that.” What? Prince Harry has adopted three personalities to help him organize his life: “one in the army, one socially in my own private time, and then one with the family and stuff like that.” The prince, the pilot, and the party boy! “There is a switch and I flick it when necessary,” he went on. “It’s the role for anybody in the army, especially the role for myself and William—you’ve got to be able to flip the switch all the time.”

Just because he’s forced to divide himself into thirds doesn’t mean each personality has equal weight. “Army comes first,” he insisted. “It’s my work at the end of the day . . . it’s very easy to forget about who I am when I am in the army. Everyone’s wearing the same uniform.” While we see the appeal of the anonymity and meritocracy his army life affords him, it’s important for him to keep it in check—at the end of the day, he’ll have to answer to his Prince side, and his grandmum, Queen Elizabeth II. Harry’s new interview seems very thoughtful and mature, and we wonder if he’s finally worked out a balance that will mark an end to his wild party days. Do you think Harry’s changed?