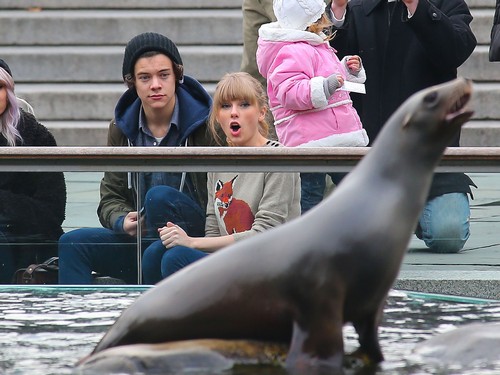 Nothing more romantic or sincere than a forced apology! Harry Styles and Taylor Swift ended their whirlwind romance nearly three weeks ago, and haven’t been in each other’s company since. Taylor’s tweeted that she’s back in the studio, and we expect she’s penning her next platinum album, which will no doubt center around the truest love (and most painful heartache) that was her 65 days with Harry.

Taylor seemed content to never speak with the louse again, but Harry’s handler Simon Cowell had other plans. Reports Daily Mail, “Simon gave Harry a friendly warning that any animosity between him and Taylor could jeopardise One Direction’s popularity in the US.” If you can believe it, their conversation was more awkward than the circumstance in which it was held!

“Harry told Taylor he didn’t hold grudges and hoped things wouldn’t be awkward when they saw each other. Taylor seemed to listen but insisted there were still things they needed to discuss.” Evidently, Taylor felt the goodwill phone call wasn’t enough” “Taylor was keen to meet face to face and talk things through but Harry felt there was nothing left to be said.” Awkward!

Don’t hurry to sympathize with Taylor though, as we’re sure she just wanted to meet face to face to dig up some more material for her music, and as a pop competitor, Harry was right to shut her down! Besides, we’ve seen her obsessive personality. Who knows what she’d have done in his presence. Perhaps announce she’s bought the flat adjacent to his–just as she did with Conor Kennedy?