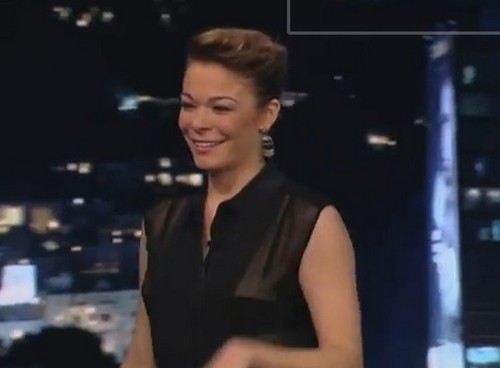 LeAnn Rimes headed over to Jimmy Kimmel last night for an interview [01/22/13].  Although LeAnn claimed when she got to the show she was not suppose to talk because she had an allergy problem and a swollen head, she took the time to talk to Jimmy anyway. She went on to explain her condition where she said the doctor stuck a needle up her nose, huh??  LeAnn said that after  her interview  with Jimmy, she was not speaking for another two weeks!  We should  only be so lucky.

LeAnn said she does not watch Real Housewives of Beverly Hills and when Jimmy told her Brandi called her insane she said, “I am. Clearly. Clearly.”   So LeAnn confirms what we all know she is totally off her rocker.

LeAnn went on to imply that Brandi lies about her and the fight between them is totally one sided. huh……If you ask me LeAnn is giving as good as she is getting in the Brandi-LuAnn war.  What do you think?  Hit the comments and let us know your thoughts!  Check out the video below of the interview!

After you watch it lets us know if you think LeAnn should fire her stylist?