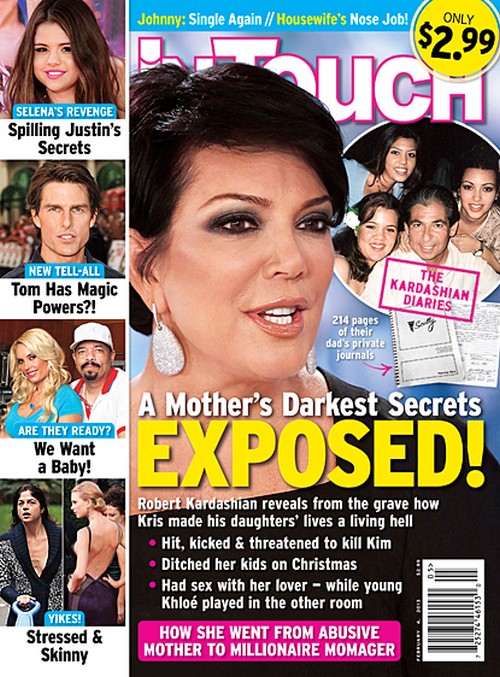 The current issue of IN TOUCH reveals the cover story, “A Mother’s Darkest Secrets Exposed!”  In a bombshell story the magazine claims this week that they have the details of Robert Karadshian, Kris Jenner’s late first husband’s secret diaries.  In the diaries Robert reveals how Mom Kris made her daughter’s life a living hell.

Robert’s widow Ellen Kardashian’s has the handwritten journals and she has been kind enough to provide them, for a cost of course to In Touch.  Everyone has a price, right?  This week’s magazine will reveal how, “Kris was kicking and beating [Kim]her and said she was going to kill [Kim]!  Kim was hysterical.”   Robert goes on to detail Kris’ alleged affair with younger soccer player Todd Waterman, claiming Kris left her kids — all under the age of 11— for days at a time. “She doesn’t leave a number in case of emergency. She doesn’t care!  She left [the] kids and screwed all night!”

The journals were written between 1989-1990 during a very difficult time in Robert’s life and there are 214 pages of information.  Kris must be cringing at the thought that L & S has their hands on them.

To find out all the details of how Kris went from abuse mother to Momager, pick up the current issue of L& S on stands now!