Taylor Swift Over Harry Styles, Moves On With Ed Sheeran 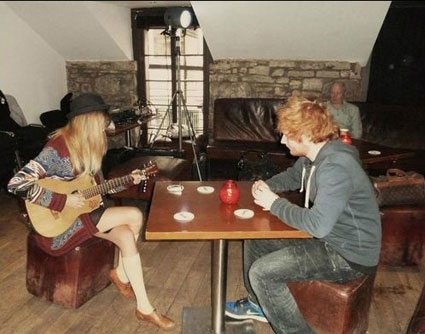 Taylor Swift and Harry Styles took the world by storm in November, when their romance officially began. If they weren’t taking innocent walks through parks, they were hooking up in various hotel rooms, or sneaking around backstage. But Harry’s wandering gaze shattered Taylor’s fairytale romance. We reported that she flew to London, and expect she took some time to stalk down Harry and demand reconciliation, but something must have happened, because she’s over him–totally!

I guess Taylor’s need for the last word was satisfied when I Knew You Were Trouble, which many believe is about Harry, soared to #1 on pop radio. Taylor was ecstatic, tweeting, “You guys are unbelievable. I’m smiling SO big right now.” No doubt hearing the rumors about her London trip, Taylor tweeted, “Quick photo shoot in London and now we’re in Madrid.” Talk about obvious! In one short sentence, she gave an alibi for her London visit, and squashed reconciliation rumors by assuring fans she’d left the country ASAP!

But Taylor needn’t worry about what fans may have thought of her stalking moves–she’s already moved on! Tonight, her high school bestie Abigail Anderson tweeted (over several hours), “So who is going to the @edsheeran show tonight in Nashville?? Because I hope it’s EVERYBODYYYY!!!…And shoutout to the bestie for the excellent entertainment tonight…Ed….you’re brilliant. Just effing brilliant.” As you may remember, Ed Sheeran is Taylor’s opening act for the Red tour, and many believe a romance is brewing!

Well, Ed got one step closer tonight, as Taylor tweeted, “BFF status to @edsheeran for hooking up my friends with tickets to his nashville show!!” Don’t be too quick to say he’s in the friend zone! They’ll be spending hours upon hours in that tour bus together–who knows what will happen? And being nice to a girl’s friends never hurts your chances! Will Taylor rebound with Ed?