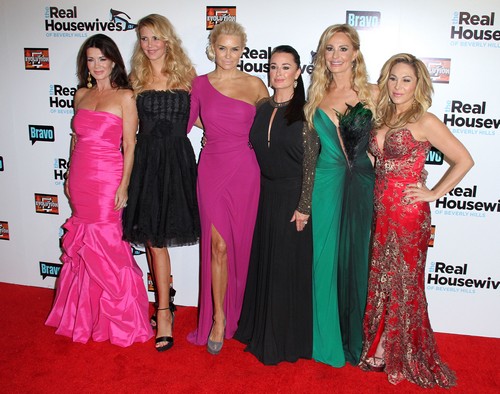 The fight to trump all fights erupted last month on The Real Housewives of Beverly Hills when Brandi Glanville publicly called out Adrienne Maloof for keeping a big secret. Since the fight, Adrienne has disappeared from the show in a bitter rage, while Brandi gets more screen time than ever. But all that happened last year–how are they now?

US Weekly, print edition February 4, 2013, promises that Adrienne will never forgive Brandi for trying to ruin her family. Adrienne explained the violation, “I set parameters and made it clear that my children would not be in the storyline,” she insists. But does that mean their existence can’t be discussed? Bravo was forced to “omit Glanville’s comments” by Adrienne, who also sent “a cease-and-desist letter to Glanville” which “basically said ‘shut the f*ck up.'”

But what did she say? Brandi exposed that Adrienne “who had a complicated pregnancy with her eldest son, Gavin…used a surrogate to have twins Christian and Colin.” We’ve known this for a while, so why the fuss? Adrienne is terrified the news will devestate the boys, who don’t know. Apparently, “a child psychologist recommended [Adrienne] wait until [the twins] are 10 years old” to tell them about the surrogate.

But NYU professor Dr. Lawrence Balter warns against waiting. “It’s better if children find out early…the kids may wonder why it’s been a secret for so long–and what else she’s keeping from them.” No matter which psychologist is right, one thing’s clear: Adrienne will never forgive Brandi! Was Brandi out of order to discuss the surrogacy, or should Adrienne get over it and fess up to her kids?