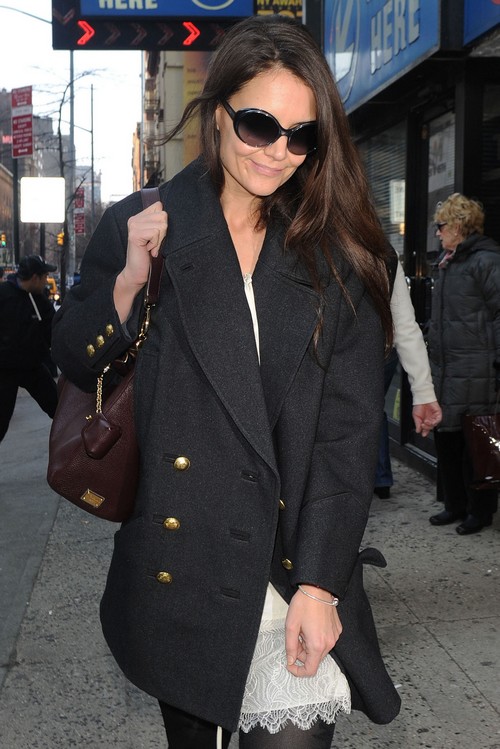 Perhaps the apple doesn’t fall far from the tree in Katie Holmes‘ family. In recent weeks she has been rumored to be contemplating attending law school, following in the footsteps of her attorney father, Martin Holmes. She started acting as a teen and had her most success during her Dawson’s Creek days. Katie has taken some film roles with mixed reviews and her Broadway play Dead Accounts closed early just a few weeks ago- all of which has made the star begin to rethink her career path.

According to the new issue of The National Enquirer the actress’s divorce and legal wrangling last summer reawakened her interest in law.

“She expressed a keen interest in law while splitting from Tom Cruise, and now that the divorce is finalized, she has the time, the money and the opportunity to go to school. More importantly, she wants to be a strong female role model for her daughter Suri.”

Katie is reportedly so serious about the possibility of this life change that she has been sitting in on close friend and Prosecutor Leigh Bishop’s court proceedings in NYC. She has also grown very close to the man who orchestrated her divorce and helped hand her back her life, Jonathan Wolfe. It’s kind of interesting that Katie has dropped her Hollywood pals in favor of this crew of legal eagles. If she’s not considering law school then she must be gearing up for one heck of a role as an attorney!

I actually could see her making such a big transition. She has seen every inch of celebrity life up close and she has acted or attempted to act in every genre out there. Perhaps the star is bored and tired of it all. In moving to New York she seemed to be attempting to live a much more grounded lifestyle with Suri. Perhaps now she wants a more typical job as well.

Can you see Katie making waves in the court room, or do you think it’s just wishful thinking on her part? Tell us your thoughts in the comments below!