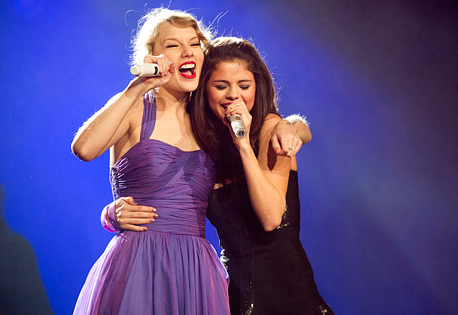 Despite Taylor Swift being one of the biggest flirts in Hollywood history, her best friend Selena Gomez is still backing up her BFF by praising her for how inspirational and good-hearted she is with people. Hmm, writing songs about ex-boyfriends and how they treated you doesn’t exactly make you ‘good-hearted’ in our books, but whatever.  The recently-single actress, who dumped Justin Bieber three weeks ago, has opened up about her friendship to Swift, saying she’s really surprised as to how humble Taylor is despite all the fame and the success she has received over the years.

The 20-year old didn’t even dare touch the subject on Swift’s love life because she was afraid she would be written into one of Taylor’s next songs if she did  but it kinda seemed like she wanted to set the record straight on her BFF’s personality and who she is as a person.. since most of us only see the country singer as a young woman who never understood the meaning of “love”.

“Taylor’s one of the most inspirational, positive, good-hearted people that I know,” Gomez told Life & Style. “I met her when she was 18, and this was before Fearless came out. It is absolutely incredible to see somebody so successful and so humble, and I think she’s been a big part of me kind of staying in line.”

While Selena praises her, Taylor isn’t seeing the fun side to people making fun of her anymore. Tabloid magazines and A-list stars have named the 23-year old one of the worst people to date, which Swift supposedly found funny at first, but now it’s gotten to the point where people mock her at big events such as the Golden Globes and Saturday Night Live.

A source told Radar Online: “At first Taylor just thought it was funny how much interest people had in her love life and she went along with it. But now she’s the butt of jokes on Saturday Night Live, in the tabloids and on the late night shows. She laughed it off, but the jokes made about her at the Golden Globes got under her skin.”