Miley Cyrus Accidentally Spills That She Is Married To Liam Hemsworth! Read What She Said Here! 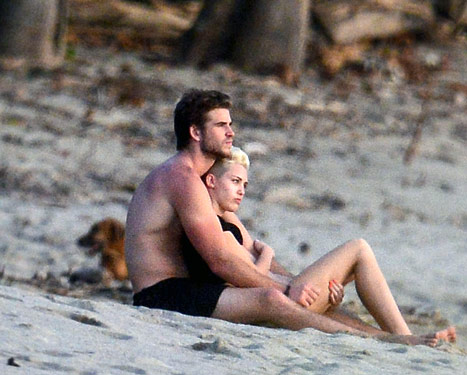 In our head, we still think she was too young to marry, but whatevs. Miley Cyrus has let it slip that she is married to Liam Hemsworth. The actor had proposed to his girlfriend back in May and though rumors had been swirling that the two could be getting married by the end of 2012, they quickly shut down rumors down by saying they are still trying to figure it out but it wouldn’t be anytime soon due to their busy work schedule.

Then, in December, we saw pictures of Liam and Miley with – what looked like – wedding rings on their fingers which had everyone buzzing into thinking they were married. And though they denied these reports too, how is Cyrus going to deny that she referred to her husband as ‘hubby’ in the March issue of Cosmopolitan? Yup, that’s right — Miley let it slip (probably by accident) that she is no longer his fiancee, she is married.

First off, she started teasing her fans by explaining how good looking Liam looks when he gets in the pool: “I’ll literally look at him and be like ‘You are hot, dear god! The other day, I turned on the pool heater and it was steaming, and he walked outside and took off his clothes and jumped in the pool. I was like, ‘I’m gonna faint – the hottest guy of my life is in a steaming pool.”

… and then she goes on to spill the shocking news as she referred to Hemsworth as her ‘hubby’: “‘This looks like a Playgirl shoot.’ So I took a photo and made it the background on my phone. My best friend grabbed my phone and was like, ‘Who’s that? He is so hot!’ [and I replied] ‘That’s my hubby!'”

Well, I guess it’s not shocking since she had already said she would marry the actor eventually. Besides – they have been dating for about 3-4 years now and seeing that Liam is a good guy, we don’t think these two are going to have any problems when it comes to filing to divorce each other. Let’s be serious, Hollywood relationships don’t last… but Liam seems to be a nice guy so, congrats to them.